Massacres In The Land, The Idiocy Of “change” And The Conspiracy Of Watchdogs 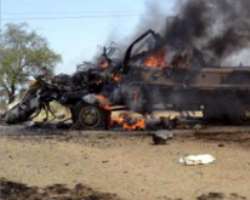 With the recent and continued killing of innocent, harmless, armless, hapless and helpless Nigerians by the Buhari administration, Nigerians are beginning to wonder if there was any real meaning in the “Change” mantra of the ruling party, APC. This is in addition to the regular invasion of homes, both private and official, of Nigerians, and the relentless flagrant disobedience of court orders just to satisfy the whims and caprices of a dictator we have as president who takes pleasure in looking away while his agents rain official terror on powerless citizens.

Nigerians had a glimpse of what was to come when on Thursday, September 3, 2015, the DSS gleefully invaded the Akwa Ibom State government house and ransacked it alongside the guest houses where it claimed it found a stockpile of arms and ammunition and stacks of the United States dollars without showing any evidence to prove its findings. Except for the PDP officials and members, every other person saw this unholy invasion as normal and even got the approval of agents of “change”. But those blessed with the uncommon gift of clairvoyance cried out against this as they saw that it could spell doom for our nation if such occurrence is not checked. Rather than prevail on government and its agents to tread softly, restrainedly and wisely, those who dared raise their voice were called all manner of names thereby giving such illegality a backing.

Expectedly, this emboldened the DSS as they went ahead to not only stop Col Sambo Dasuki (rtd), from travelling abroad to seek medical attention as ordered by a competent court of law before whom the same DSS charged him, they also laid siege to his house for one full month thereby effectively placing him under house arrest.

As if that was not bad enough, the DSS and the military treated us to a double-barrelled macabre dance when on December 2, 2015, the DSS were busy forcefully evicting Col Kayode Are (rtd), former DG of the same DSS, from his house on the orders of the Emperor's lackey, Lawal Daura, current DSS DG, once again, in defiance of a subsisting court order. The manner in which the DSS executed the eviction was not only shameful but disgraceful and iniquitous as Are's wife was even reportedly bitten during a fracas that involved gunshots against Are's family. As that was going on in Lagos, the military were busy mowing down peaceful IPOB/MASSOB protesters in Onitsha, killing 9 persons in the process.

It was very shocking that in spite of all these atrocities perpetrated by security forces and alien to thriving modern democracies, our traditional watchdogs suddenly went into hibernation pretending as if all was well. In the past, and with little provocation not anything near what we experience today, the Nigeria Labour Congress (NLC)/ Trade Union Congress (TUC) would have declared “war” on government especially with the current fuel scarcity making matters worse; they would have called Nigerians out to occupy landmark places; they would have called for civil disobedience and in some cases, a strike action to force back the hand of government. The Nigerian Bar Association (NBA) would have put up strong protests by boycotting the courts as a result of the obvious intimidation of judges by security forces who work to stampede the judiciary to give blanket judgements that would favour the Emperor and his party

even if such judgements is against common sense and the constitution. The NBA would have organised protests to drive home the point that never would they allow the executive to keep disobeying court orders and defying judges to the detriment of the fundamental human rights of citizens and dealing great injuries to basic democratic principles and the rule of law. The religious leaders would have given stern warnings against such wickedness in the land; the civil rights groups would have marched down on Aso Rock or the National Assembly to register their displeasure at the way things are going. But no one seems to be interested because Buhari is president and APC is the ruling party. It does not matter if they both drag our nation into the abyss, and into the abyss they are both dragging us unless we lay aside our political, ethnic and religious differences and confront headlong what has become our common enemy, the determination of a small cabal with dictatorial mentality to kill the citizens and our institutions.

The recent massacre of Zaria where Shia Muslims were killed in their hundreds simply because they barricaded the way of the Chief of Army Staff is the climax of the needless hounding and killing of citizens but is certainly not going to be the last. What would have been wrong if the COAS avoided that confrontation and took another route to his engagement that day? What would have been wrong for him to even cancel the engagement and send words that someone else should represent him at the occasions since he was being barricaded while he turned back home? Were the occasions for which he was travelling more important than the hundreds of human lives wasted? Former President Goodluck Ebele Jonathan while he was the Commander-in-Chief had his own convoy stoned twice and some of his security details hospitalised as a result of attacks in Katsina and Bauchi. The miscreants went beyond just barricading his way to actually stoning him, yet, no single shot was fired. Nobody was injured not to talk of being killed. And here we have a mere COAS who would prefer to have Nigerians killed just for him to attend some mundane ceremonies.

It would have been bearable if the massacre ended on the spot but for the military to have the effrontery to go to El Zakzaky's house to have him shot, his wife arrested and got him humiliated by pushing him in a wheel barrow while he was drenched in a pool of his own blood is the height of man's inhumanity to man and some of us cannot afford to keep quiet in the face of this growing danger even if those affected are not related to us in any way. The principle is to speak and fight against such reckless executive impunity while it is still far away from one because if you do not, the possibility that it would come near you is very high.

street urchins and literally threw him into a waiting van in full public glare? Why did it have to take the horrendous murder of Nigerians in their hundreds by state agents for people to start talking? Even the international community has betrayed us. The Ambassadors of USA, France, and High Commissioners of Britain, Canada etc that used to be very ferocious in speaking out and acting against such incidents in the past have suddenly gone dumb! What has Nigerians done to deserve to be left to the wicked machinations of evil and wicked men? For how long are we going to continue to suffer this mishap?

Is this the “change” they promised us? Is this how idiotic “change” can be? What about the “change” agents, where are they? Why are they hiding their heads in shame? Is this the depth of deceit they sold to Nigerians as campaign promises? What is the conspiracy of silence among civil rights groups about? Is it still part of the “change” to keep quiet in the face of gross injustice and oppression? With the way things are going and unless something drastic is done, we are walking speedily into a state of self-destruct. May God help Nigeria!