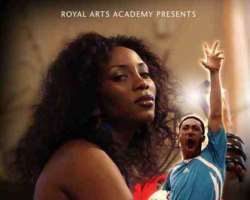 Ghanaian Actor, Majid Michel and Nollywood superstar, Genevieve Nnaji seem like a match made in movie heaven. In the movie, Silent
Scandals which was released in 2009, the simmering on-screen chemistry was so clear. Now, the duo are back for some more.

In “Bursting Out“, one of the latest releases from the popular Royal Arts Academy, Genevieve plays a single woman on the lookout for love. The cookie cutter guys simply don't capture her attention, she takes a walk on the wild side when she meets Majid Michel's character, a mysterious “rider”…

The movie sounds really interesting, if the trailer is anything to go by, this is definitely a must watch!

Other stars of the movie include Omoni Oboli, Desmond Elliot, Susan Peters and Nse Ikpe Etim.

The movie was produced by Emem Isong and directed by Desmond Elliot & Daniel Ademinokan.

Watch the trailer for “Bursting Out”. The movie will be released in May 2010.

Story by Posted by nollywoodgists.com