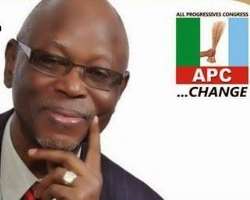 The National Chairman of the All Progressives Congress (APC), Chief John Odigie-Oyegun has identified corruption, especially political corruption as the biggest threat to sustainable development in Nigeria today.

Odigie-Oyegun said this while delivering a keynote address at the end-of-year dinner of the Council of Retired Federal Permanent Secretaries (CORFEPS) in Abuja.

He submitted that the Civil Service remains the fulcrum for national development in this era of Change.

The APC National Chairman, himself a one-time Permanent Secretary, lamented that the prevailing public opinion is that the Civil Service is a hotbed for corruption, ineptitude and mediocrity hence the current commitment of the President Muhammadu Buhari-led administration to rid the nation of the scourge.

According to Odigie-Oyegun, while the generality Nigerians misunderstand the philosophy and modus operandi of the Civil Service, it remains one of the most important institutions for national cohesion and development.

"I can confidently affirm that even at that time, the Service was often not appreciated by the generality of Nigerians who misunderstood our philosophy and modus operandi. Notwithstanding then, as at today, yet the Civil Service remains one of the most important institutions to national cohesion and development" he said.

Oyegun lamented that while political leaders often get the limelight owing to their laudable rhetoric on ways to improve and sustain the nation's development, the Civil Service which is the engine room is often relegated to the background or at worst fingered as antagonists to development efforts.

The APC National Chairman advocated that serious efforts be made to improve the Civil Service, beyond remuneration and boosting morale to a level where Civil Servants regain the sacred sense of the importance of their work in delivering valuable service to humanity.

Odigie-Oyegun said this can be achieved through greater strategic planning and thinking, improved operational efficiency, transparency and accountability among others.

Earlier, the Abuja branch Chairman of the Council of Retired Federal Permanent Secretaries (CORFEPS), Alhaji Yayale Ahmed in remarks at the dinner charged the APC to deliver on its lofty 2015 electoral promises.

"For the first time in Nigeria's political history, an opposition party defeated a ruling party. Success is one thing but managing it is another. Nigerians are watching to see if success at the polls will translate to making Nigeria better." Alhaji Yayale Ahmed, a former Head of Service stated.