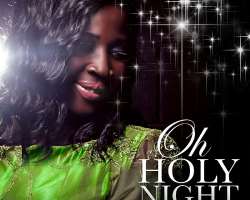 US based Ghanaian gospel musician, Precious Hanna Ewoo has made it just in time for the ​pre-​Christmas release of her new music titled Oh Holy Night​​. The music video for the new song was released on her YouTube Channel early in December 2015.

Oh Holy Night according to Precious Hannah is “my own rendition of the​​ ever popular Christmas carol by that same title, it is also my very personal way of making this year’s celebrations a merry one for my fans and all who love and support my music and the spirit of Christmas in general.”

The music video has a touch of violin playing alongside other instruments which gives it a classy undertone. The work was produced and directed by HiyaHites Productions with Ebenezer Asiem as its executive producer.

In the middle of 2014, Hanna​h​ embarked on a prisons ministry project a year before the release of her Onyame Adom album; a contemporary Ghanaian ​gospel​ CD. Hannah says she is now busily working on her next musical and humanitarian project that will have the interest of her supporters in Ghana and US​ at heart​.

To catch up with Hannah and what she is working on, check out updates from her website www.precioushannah.com