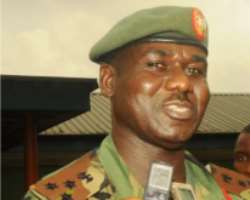 SAN FRANCISCO, December 19, (THEWILL) –The death sentence passed on 66 soldiers in January and March 2015 has been commuted to 10 years imprisonment by the Chief of Army Staff, COAS, Lt Gen. Tukur Buratai. This is coming at a time the Defence Headquarters has restructured the leadership of the ongoing offensive against Boko Haram insurgents in the North-east.

Spokesman of the army, Col. Sani Usman disclosed this in a statement issued on Saturday, noting that the soldiers were among the 71 arraigned “on criminal conspiracy, conspiracy to commit mutiny,  mutiny, attempt to commit an offence (murder),  disobedience to particular orders, insubordinate behaviour and false accusation”.

Out of that number of soldiers, who were tried, discharged on some charges but found guilty and convicted on other charges which included mutiny, Usman disclosed that 66 were found guilty on some of the count charges and sentenced to death, while five were discharged and acquitted and one was given 28 days imprisonment with hard labour.

“However,  following a series of petitions, the chief of army staff, Lieutenant General Tukur Yusufu Buratai,  ordered a legal review of the cases. The directive was carried out to examine the merit of each case. It was on the basis of the review and recommendations  that the chief of army staff commuted the death sentences of the 66 soldiers to 10 years jail term. The sentences are to run concurrently,” Usman explained.

He added that the cases of other soldiers were being reviewed and would be made public when the appropriate reviews were completed.

Making this announcement in a statement he issued on Saturday, the  Acting Director of Defence Information, Brigadier General Rabe Abubakar explained that the development is aimed at restrategising and injecting new tactics to the existing operational procedures with the aim of finally knocking out the terrorists who now devised means of hitting soft targets through suicide bombings and isolated attacks on remote villages.

Abubakar assured that, “operation Lafiya Dole will continue to be responsive until all elements of terrorists are finally crushed”