THE NEED FOR EAST-WEST RAILWAYS 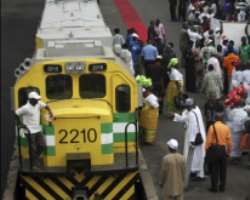 PLEASE NOTE: This write-up was first written on 12th January, 1998, and was personally sent to some National Newspapers in Nigeria like Thisday.

During festive period like Christmas, New Year, Easter, and long holidays, my people (Igbos) travel in droves to their homeland-Igboland; and they also suffer a lot while travelling. Since the civil war ended in 1970, it has become somewhat cultural, for Igbos to travel en masse, especially during Christmas periods. Being that many of them live in Lagos and other Western Nigerian states, this periodic journey becomes a yearly nightmare. They have no alternative mass transport system than to use buses of different states of road worthiness. Some of the buses could rightly be classified as rickety and indeed 'not road worthy'. But they have no choice than to travel in these near-death buses, in order to be among their kit and kin in their homeland—Igboland, during this said periods. He or she , who did not visit home during this peak travelling periods for Igbos, is seen as not possessing home-consciousness and not oriented towards the ideals of developing Igboland.

But I grief for my people, because they suffer immensely while travelling during this said periods, in order to meet their societal expectations. Also, many Igbos who live outside Nigeria, come into Lagos by air (while on their way to the East), and do not have any other choice than to travel by road or air to the East. This is because Igboland is shut-out from direct international flights. And while this 'outside-the- country Igbos', join in the rush to get to Igboland either by road or air (many a time it is by road because many cannot afford the exorbitant airfares or many wanting to conserve money for needed community self-help projects), mayhem ensues, and they suffer massively. Then, the question is: why can't there be another alternative means of mass transportation linking the East of Nigeria with the west of Nigeria? We have in mind: Rail Transportation!

Rail transportation world over is considered the safest, the most affordable mass-mover when compared with other systems of transportation. Indeed, it also keeps a lot of people in employment. Its development is also considered as a long-time capital investment that immensely betters society. With all these in mind, the question again is: Why is the Nigerian nation denying itself the great importance of the East-West Rail-Linkage, which this writer tags: East-West Railways?

Is it that there is no money to invest in this project that will surely pay-back wholesomely the capital spent on it? If so, the answer is short-sighted. Short-sighted because this all-important investment, will surely, attract private investors within and from outside Nigeria. It is a long term investment that will surely repay its investors, when properly managed (especially when privately managed—that is, when run by private investors and not by government). And this writer overwhelmingly believes that the East-West railways will attract massive passenger and Cargo Carriage and therefore, will be lucrative rail-route system.

In conclusion, this writer submits: Let my people stop suffering massively while travelling between their homeland and the Western part of Nigeria. He therefore implores the Federal Government of Nigeria, to please build the East-West railways, either through government investment or private investment or jointly. The need for it has become an important national development project. A further denial of this project smacks wickedness on the part of government. Also, its non-existence means denial of citizens' right to existence without harm. The Nigerian government, over to you! Let the East-West railways come into existence now. Its time has come. It is needed by citizens and it is very important to their lives. The Petroleum Trust Fund (PTF—which was chaired by President Buhari then) can at long-last point this project as one of its achievements for the next generation of Nigerians. Meaning, that PTF can sponsor this important national project, because its details cover transportation, which this project is located. On the other hand, whereby Government is indeed, financially handicapped to build it, it could as well invite local and foreign investors to bring this all-time, all-important National-dream and developmental effort into existence. Investor s will surely find it profitable with time. This writer also submits that the Federal Government of Nigeria should please stop dilly-dallying on this important national project that will surely benefit its citizens no matter where they come from, and which will also, further and foster national-unity and linkage of its internal parts.

Additionally: This writer also thinks, that while the East-West railways is being brought into existence, the Lagos-Abuja, Abuja- Port Harcourt rail links, should also be conceptualized and achieved. They are also, very important rail-track system that will immensely benefit the nation. They Lagos-Port Harcourt (through Benin, Onistsha, Owerri, Aba, etc), Port Harcourt-Abuja, and Abuja-Lagos rail-links will form the “Triangular National Rail System” that will surely uplift Nigeria—at least developmentally.

Food for Thought: If there is an effective, comprehensive and affordable rail network that links all the cities in Nigeria, indeed, all its nooks and corners, air travelling citizens will not fall prey to the seasonal bad weather conditions that disrupts flights and grounds multi-million Naira business deals (during the yuletide seasons). Good rail system will surely be an alternative fast (and mass) moving transport system.