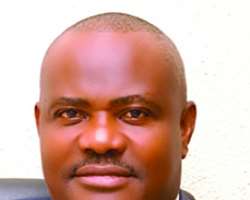 …As Gov Wike Exposes Grand Conspiracy to Take Over Rivers

…Says, ‘We’re Not Afraid of Re-Run

The Rivers State Chapter of the Peoples Democratic Party (PDP) has commissioned a Multi Million Naira Ultra Modern Multi-Purpose Hall located at the State Party Secretariat along Aba Road, Port Harcourt, as part of its good governance and service delivery to party faithful and teeming supporters in the State.

Speaking during the event which include A One Day Seminar/Workshop for Party Officials And Government Functionaries, the State Party Chairman, Bro. Felix Obuah explained that the Party is a vehicle for sustainable socio-economic development, good governance and effective service delivery, adding that while striving to achieve that, the party leadership and members must imbibe party discipline, the right value system and good ethical conduct, which are necessary tools for such transformation.

He called on all party functionaries and public officers (elected or appointed) on the platform of the party to be guided by the party’s manifesto, rules and regulations as provided in the constitution of the PDP 2012 (as amended), stressing that no individual or groups, no matter how highly placed is bigger than the party. “The party is supreme and will remain as such”, he said.

The PDP Chairman also called on all party faithful serving in different capacities to see such opportunities as platform to render service to the State, while calling on them to endeavour to pay their monthly dues. “I charge you all to always be willing to contribute towards the growth and wellbeing of the Party. As without which, our stay in government will be fruitless and any effort in futility is worthless. As leaders of the party in the State, we shall continue to uphold the tenets and foundational principles already established for us by our founding fathers”.

Speaking shortly after commissioning the project, Rivers State Governor, Chief Nyesom Ezenwo Wike commended the leadership of the party under Bro. Felix Obuah for being focused, supportive and completing such meaningful and gigantic edifice, saying he was surprised to see the project completed. “I am truly surprised because the Chairman only mentioned it once to me, only for me to come here today to commission an already completed edifice”, he said.

Commenting on the Appeal Court judgment, Governor Wike disclosed that there is a grand plot to take Rivers State at all cost, explaining that although the Party is not afraid of participating in any re-run election provided it is conducted without external influence and intimidation, but will exhaust its legal options by approaching the apex court following the ruling of the Court of Appeal.

Governor Wike however warned against rigging in the event of any re-run, stressing that the party will not fold its hands and watch anyone rig election against the will of the people.

While calling on the teeming supporters and party faithful not to be disillusioned by the decision of the Appeal Court, he called on them to remain calm and go about their normal businesses and not make trouble.

Declaring the workshop open, Acting National Chairman of PDP, Prince Uche Sekondus represented by Chief OCJ Okocha (SAN) who doubled as Chairman of the occasion, urged participants to seize opportunity provided by the workshop to imbibe party discipline and loyalty..

Lectures were delivered by Professor Henry Alapiki on Good Governance: The Party as a Vehicle For Economic Development And Effective Service Delivery and Professor Ibibia Paul Worika on the topic: The Place of Party Officials/Government Functionaries in Adherence to Party Discipline, Ethical Conduct and Moral Rectitude as Effective Tools for Political Re-orientation.