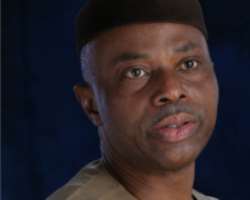 Nigeria is a country known to be plagued by extreme poverty, illiteracy and disease despite the overwhelming abundance of natural resources and wealth God has endowed her with. It has defied logic, no matter how adjusted, that despite her wealth that should evoke envy from even great nations like the United States of America, Britain, France etc, her people still wallow in abject poverty, dwell in squalor, left uneducated, oppressed by the rich and powerful who often use state powers and connections to pass and entrench laws that further dispossess the people of their dignity and humanity in order to promote their own selfish agenda, and sometimes have the people embalmed alive as a result of the absence of basic health facilities and other infrastructure necessary for the ennoblement of man and his environment.

From Lagos to Kano, from Owerri to Oshogbo, the cities dance on squalid landscapes filled with filth, human and traffic congestion, disorderliness, hunger and poverty made worse by lack of care from government. It is survival of the fittest as either government is not providing the needed services to run a decent state or the little provided has been left to decay and bedevilled by inefficiency, incompetence, laziness, all resulting from a weakened or total absence of supervisory capacity by government.

However, there is a state that is blazing the trail in the way and manner a state should be governed; what one can actually call a Model of Development not only for Nigeria but also for all African countries who wish to sincerely elevate the standard of living of their people, improve upon the services provided for them and enhance their environment through enduring designing and redesigning of cities without making the people suffer in the process. That state is Ondo State and the governor is Dr Olusegun Mimiko.

What greets one on entering Ondo State is the neatness of the place. Akure which is the capital can pass for unarguably the neatest city in Nigeria, and this also reflects in the people. Everyone you meet is friendly, unassuming and eager to help when called upon despite the popular notion that Ondo people are “stubborn”. To find out the secret behind these sterling qualities among the people, one does not need to look too far as they talk with measured pride how Olusegun Mimiko has touched their lives positively and impacted on their children loftily while leaving lasting legacies for their generations unborn. They are very quick to tell you about their kaadi-Igbeayo, a rare initiative of the state government in the form of a multi-purpose smartcard conceptualised to have the biometric and all other forms of data of residents of the state, indigenes and non-indigenes alike. The card is designed to “reduce unwarranted greed, hoarding, racketeering and diversion associated with distribution of some agriculture inputs and supplies, ensure free access to education and micro-credit facilities and guarantee access to other social welfare programmes of government” that are not only available but also speedily rendered.

Everyone is happy to flaunt their card: from the market woman, vulcaniser, taxi driver, carpenter, to the teacher, engineer, doctor, lawyer etc, kaadi-igeayo enjoys patronage from all and sundry as it is easily operable.

For example, the Medical Village in Ondo Town, is a one-stop shop for many medical needs including the one for which Nigerians go abroad to pay ridiculous bills. The Village consist a Mother and Child Hospital, a Trauma Centre, University of Medical Sciences, Gani Fawehinmi Diagnostic Centre and the Kidney and Dialysis Centre, all equipped with modern facilities, young, enthusiastic, responsive and friendly staff and an unusual cosy ambience devoid of any odour usually associated with hospitals.

Services at the Mother and Child Hospital are free for residents of Ondo State who, of course, are expected to come with their kaadi-igbeayo. All births whether through natural process or medical intervention i.e Caesarean Section, are absolutely free. For non-card holders, Caesarian Section services can be as low as N10, 000. Children below the age of five also have the rare opportunity of being treated free of charge no matter the kind and seriousness of their ailment. Little wonder the hospital is recording large number of patients who come from even outside the state to receive efficient, effective and easily accessible medical care. This has significantly driven down the mortality rate in the state which now has the lowest incident of mortality at birth in Nigeria today. This fact is helped by the governor's deliberate agenda of systematically phasing out traditional midwives who are incentivise for referring their patients to a hospital, by giving them coupons on a monthly basis which they exchange for certain amounts depending on how many number of patients they referred. They are further empowered through skills acquisition which they fall back to after exiting the traditional midwifery trade as required by government.

Education is another area where government is touching the lives of the people in the state. The state's model primary schools cannot be matched by any other anywhere in Nigeria. Equipped with functional libraries, ICT classes with a computer system per table, gigantic and effectively utilised administration block that can easily passs for a Senate building of some univeristies, multiple playgrounds, standby generators, large auditoriums, well-spaced classrooms, highly motivated staff, Ondo schools are in a class of their own. This is in addition to the free school bus shuttle for all students irrespective of whether they attend public or private schools. This has further reduced the financial burden of transportation fare on the parents, and the programme has continued uninterrupted in the last three years. Private schools in Ondo State have been forced to sit up as they now embark upon policies and activities that would improve their system in order to stem the tide of exodus of students from private to public schools.

As it is well known, Ondo State is one of the busiest pass-through states in Nigeria. The number of accidents in such a state can be expected to be high. However, to stem the rate of casualties, Gov Mimiko, the Iroko, as he is popularly called for his knack for achieving very tall dreams, set up the Ondo State Highway Rescue Station with stations strategically located in different parts of the state to serve both intra and inter-state travellers. Currently, the Station has met its target of arriving at any accident

scene within 15 minutes of incident and is currently pursuing a target of 5 minutes from time of incident as mandated by the governor. This has saved more lives than it was the case in the past as the Stations are well equipped with modern facilities including extricators, ambulances, radio rooms etc, thus making Ondo State a pioneer in effective rescue operations.

The building of modern markets, shopping malls, motor parks, mechanic villages, Auto Mart centres etc has freed up space on the roads and left the roads neater and more spacious allowing for freer human and vehicular movements. The roads that used to be occupied by hawkers and market women, indiscriminately parked buses/taxis, mechanics, automobile dealers, artisans etc is now a beauty to behold. In building these facilities, Mimiko ensured that all those who were affected were allocated spaces in the facilities while adequate compensations were paid to those due without rancour as the government carried the people along from conception of the projects to their actualisation. Space will not allow this piece to focus on particular other projects in other parts of the state. However, the dualisation of the road in Ilaje is a testimony of the spread of projects in Ondo state.

From the foregoing, it is obvious that Ondo State is now the cynosure of all eyes, thanks to the governor. Little wonder then the state has hosted two very important events within one month of completing its International Culture and Event Centre in Akure which has the largest stage in Nigeria and other ultra-modern facilities; the Nigerian Society of Engineers had its annual engineering conference there from November 16th – 20th, 2015, and about three weeks after, hosted the Best of Nollywood (BON) Awards on December 13th, 2015. The two events attracted the crème la crème of the society to Ondo State.

Businesses are also being attracted to the State, the latest being the South African owned Shoprite which recently opened its outlet in Akure, the state capital. Apart from creating more employment, Gov Mimiko has ensured that local content is given high priority, hence, products like poultry sold at Shoprite Akure are produced in the state. This also shows how strong the agricultural policy of the state is.

Ondo people are appreciative of what the governor is doing and are solidly behind him. It is obvious from the joy and pleasantness they exude that they will never allow anyone to deceive them with lies and propaganda manufactured for the sole purpose of “capturing” power and then take the people back to a state of opprobrium from which the Iroko has rescued them. They will not sell their heritage for a pot of porridge. Those who use money to blind people just to get power for the sake of it should look elsewhere as Ondo State is not for sale. Ondo people will resist every attempt to turn the state to another conquered territory of a certain State Landlord operating from Lagos. The people have since embraced sunshine and have collectively said no to darkness. Let the sun keep shining in Ondo!