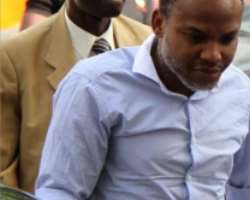 SAN FRANCISCO, December 17, (THEWILL) – Justice Adeniyi Ademola of the Federal High Court, Abuja has ordered the Department of State Services, DSS, to immediately release the Director of Radio Biafra and leader of the Indigenous People of Biafra, IPOB, Nnamdi Kanu, from its detention.

Kanu has been held in detention for at least 90 days despite an order granting him bail in October. After the lower court granted him bail, the DSS procured an order of the Federal High Court, Abuja, to keep him in detention. However, Kanu's lawyer, Vincent Obetta, filed a counter application, seeking bail for the accused person.

Handing this order on Thursday, Justice Ademola ruled that the continued detention of Kanu by the secret police was unlawful. This is coming after Shuaibu Usman of the Chief Magistrate Court in Wuse zone 2, Abuja, had yesterday discharged the IPOB leader on all counts of criminal conspiracy, intimidation and leading an unlawful society brought against him by the Federal Government.

The government through the DSS had opted to withdraw the case at the lower court to allow a higher court, which has jurisdiction to entertain charges bordering on terrorism, to take over the suit.