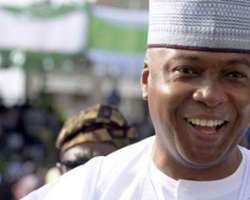 The Senate on Wednesday approved the Medium Term and Expenditure Framework (MTEF) submitted to the National Assembly by President Muhammadu Buhari and advised the federal government to open a single salary account for its employees with a view to reducing personnel cost.

The approval of the benchmark by Senate as proposed looks ambitious in view of the further slump of the global price of crude oil to $36 per barrel on Monday from the $40 per barrel rate when the document was prepared.

The approval was sequel to the report of the Joint Senate Committee on Finance and National Planning presented by its Chairman, Senator John Eno.

The Senate advised the Central Bank of Nigeria (CBN) to initiate measures meant to close the gap between parallel market and the official exchange rate. It also advised the federal government to sustain the current tempo towards increasing the federal government independent revenue and diversification of the economy adding that the implementation  of TSA with e-collection platform should be sustained.

The parliament also implored the federal government to establish a data base and simultaneously consider creating a single salary account for all its employees with a view to streamlining and reducing personnel cost.

Other recommendations of the joint committee as approved by the Senate are as follows:

“The relevant committees of the National Assembly should closely and constantly oversight the MDAs responsible for implementing special intervention programmes to ensure that the targeted populace benefits and in order to avoid abuse;

“The diversification of the economy should be accompanied with economic modernisation such that the economy can be more competitive and productive; arrears of 2015 fuel subsidy for domestic consumption as proposed in the MTEF be sustained;the finding of the infrastructural development stated in the MTEF should be clearly captured in the details of the 2016 Appropriation Bill;

“The National Assembly in close collaboration with the executive should as a matter of urgency consider an accelerated passage of the Petroleum Industry Bill (PIB) particularly those sections with implication on joint venture funding by the federal government (JV Cash Calls).

In her contribution, Senator Abiodun Olujinmi (Ekiti South) mocked the ruling All Progressives Congress (APC), saying whereas the party promised to equate the value of naira to that of the dollar when it was campaigning for election, the party helplessly proposed N197 to a dollar exchange rate.