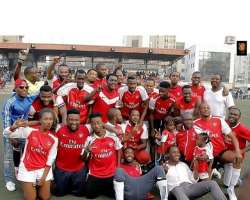 The debut season of the All Star Football tournament held at the Campos Mini Stadium, Lagos Island on Sunday, December 6th 2015.

Others include Frank Edoho, VJ Adams, Segun Arinze, Asisat Oshoala of Liverpool Ladies and Ebi Onome of Nigeria’s football team amongst others.

The tournament featured four teams; Arsenal, Barcelona, Chelsea and Manchester United with the celebrities playing for the teams they support.

The Gunners faced the Red Devils of Manchester United in the first game and defeated them by two goals to Nil. AY emerged the man of the match of this half.

He first struck the bar with a lob before missing a penalty late on in the half. Arsenal however took the lead in the first half via a Sudanese player Abdul.

AY doubled the lead for the Gunners.
The United team consisting of Akpororo, Emmanuel Ikubese, Solidstar and more were disjointed and struggled to contain the front three of Sexy Steel, AY and Sensei Uche. Arsenal however missed their second penalty but held on to a win

In the second semi-final clash, Barcelona lost to Chelsea on penalties after playing a 1-1 draw. Barcelona missed a penalty kick, which led to a 3-2 victory for Chelsea.

Competing for the third position, Barcelona trashed Manchester United 1-0 to earn the right to the third champions’ cup.

In the finals that had spectators on their toes, Arsenal conquered Chelsea, a team which comprise of Flavour, Ossy Achievas and more to emerge champions of the Allstars Football tournament Season 1 with AY grabbing the winning goal.

AY, who played for Arsenal, wowed spectators with his unforeseen mastery of the sport. This led to being awarded the Most Valuable Player (MVP).

The All star Football Competition will be held yearly, with its second season to hold in June, 2016.