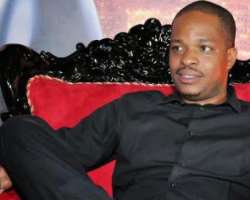 The Chief Executive Officer of El Carnaval and founder of "Industry Nite", Mr. Matthew Ohio has been honoured by Nigerian students for his outstanding contribution to the development of the nation's entertainment industry and for exemplifying distinction, efficiency and excellence.

The award was presented to him at Spice Route during the Industry Nite that hosted to Eric-Manny's Runtown.

The students, who were represented by the leadership of the Nigerian OSCAR and led by its president Sam Adegbola, described Matthew Ohio as an "entertainment juggernaut who has positively and consistently impacted the society with his innovative initiatives.

"His contribution to youth development and nation-building is exceptional and Mr. Matthew's sui generis personality is particularly pleasing", Sam said.

During the presentation, Sam Adegbola, an erstwhile Director of Information and Strategy of the National Association of Nigerian Students (NANS) said "Mr. Matthew Ohio's nomination was approved by the General Assembly, which is made up of students' leaders from 118 tertiary institutions in the country and representing over 40 million Nigerian students, both at home and in the Diaspora.

The award presentation was witnessed by notable figures like Runtown, Olisa Adibua, Sesan and Fade Ogunro, Phyno, Okwudili Umenyiora, the CEO of Dilly Motors, and many other A-list entertainment practitioners.