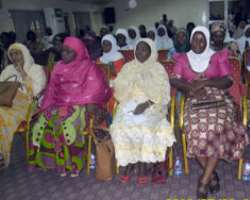 (Lagos, 2015)The Benue State NYSC Camp Commandant, Captain Abalaba, evidently in a state of Islamophobic delirium, went on a public display of aggression against a serving female Muslim corps member on 13th November, 2015 simply because of her hijab.

This grossly irresponsible and unprovoked attack on a young lady in hijab and the Amir of the Muslim Corpers’ Association of Nigeria (MCAN), Benue State, is not only detestable, it shows clearly that there are still too many loose cannons in the country that can resort to intimidation and brute force to express their bigotry.

MPAC likes to thank the Director-General of the NYSC, Brigadier-General, Johnson Olawumi, and the Benue State NYSC officials for showing leadership and moving very quickly in the right direction to address the issue. By decamping Captain Abalaba pending further disciplinary actions, the DG has sent out a clear message of zero-tolerance to him and other bigots.

Relieved of his post and awaiting the consequences of his actions, Captain Abalaba will hopefully now have some quiet moment to reflect on his irresponsibility and wrestle with the demons of intolerance and bigotry he harbours.

Although some media sources have also reported that the Director-General announced the ban on the use of “long hijab” in the aftermath of this event in Benue, MCAN has dismissed the ugly rumour. The breathless manner in which certain newspapers reported this false news, is another proof, if any is needed, of their masked hypocrisy and complicity in propagating Islamophobia.

Firstly, it is not true that terrorist attacks are perpetrated only by people who “look like Muslims”, or even that such acts are likely to be perpetrated by a woman in hijab, or that the hijab allows concealment of dangerous items. By making a sweeping determination of this type, an entire group of people is automatically put in a state of heightened attention, and rendered suspects.

On balance, the NYSC camps are not necessarily worse affected by the danger of terrorism than the epicentre of the Boko Haram insurgency, or other parts of the country. Yet, ban on hijab has not helped in any of the tactics of counter terrorism in any place or country. To be sure, superficial profiling does not enhance security.

The argument that religious profiling of this nature will aid the anti-terrorism effort is both fundamentally flawed and counter-productive. The most dangerous terrorist groups, among them Boko Haram, know how to use profiles to their advantage by recruiting against type.

No one argues, for example, that the NYSC may not dialogue with the Muslim stakeholders on the best form of hijab suited for the female Muslim corps members in service. Or at a time like this, that they cannot follow up on specific tips to prevent terrorist attacks on the camps. What we say is that consultation with the stakeholders prior to formulating such policies will be the right thing to do, and that superficial profiling is flawed. It is flawed because it unfairly targets the same victims of those who are prepared to kill one of their own.

The Muslim community is willing and ready to continue to work as credible partners in the fight against terrorism on all fronts and to build bridges of peace. Terrorism is the ultimate expression of intolerance, and a scourge that affects all. Nigerians not only must remain vigilant against the threat of attacks but also about how we decide who is dangerous and who is just different.

MPAC stands in solidarity with the MCAN on this issue and has offered its unique assets and supports in securing the Muslim woman’s rights and in working out amicable solutions.

MPAC will like to use this opportunity to call on the Director-General of the NYSC, Brigadier-General, Johnson Olawumi, to look much deeper into the recurring issue of Islamophobia on NYSC camps in all the ways it has manifested itself (series of abuses in NYSC camps over the last decade are catalogued in MPAC communications to the NYSC in the past and our press releases). We enjoin him to go further and enforce policies to dismantle the infrastructure and mentality of hate that makes Islamophobia acceptable to some. We also enjoin NYSC to declare and make available its policy regarding the use of hijab in official publications and on its website.

Those who support the use of profiling against the Muslims and calls on Muslim women to submit to what amounts to stripping believe that the stakes are now so high that we should accept anything to “protect ourselves and be safe”. In fact the opposite is true: the stakes are now so high that the nation cannot afford to use an anti-terrorism mechanism as deeply flawed as religious profiling. And that tolerance is misunderstood in much of the Nigerian society shows how much progress has yet to be made.

Disclaimer: "The views/contents expressed in this article are the sole responsibility of the author(s) and do not necessarily reflect those of The Nigerian Voice. The Nigerian Voice will not be responsible or liable for any inaccurate or incorrect statements contained in this article."
Articles by Disu Kamor
16-11-2016  The 10th year Of Sultan Reign- Celebrating A Royal Icon17-10-2015  Boko Haram: From Despair To Hope1-4-2015  Election Of President-elect Mohammadu Buhari Could Be A Turning Point21-2-2015  2015 Elections: Disfiguring The Public Face Of Religions27-11-2014  Radical Ignorance Is The Threat To PeaceMore...