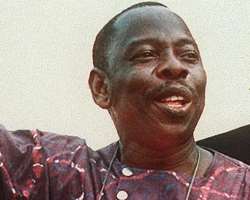 Disclaimer: "The views/contents expressed in this article are the sole responsibility of the author(s) and do not necessarily reflect those of The Nigerian Voice. The Nigerian Voice will not be responsible or liable for any inaccurate or incorrect statements contained in this article."
Articles by Ben Ikari
25-8-2016  Buhari Isn't Implementing Unep Report Adopting Jonathan's Hyprep Andaccepting $hell, Nnpc As Part Of21-6-2016  Buhari And Team, Shell Not Honest About Ogoni Clean-up: Flag-off Wastheatrical1-3-2016  Ogonis Killed By Nigerian Military-need For Independent Inquiry Commission6-1-2016  Biafrans Have Right To Secede From Nigeria—secession Is A Fundamental Human Right25-8-2015  Ogoni Unep Report: How Buhari Can Succeed Or FailMore...