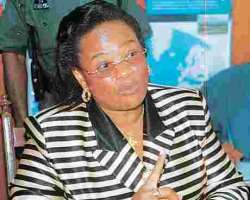 The minister made the call at the 55th anniversary celebration of the Nigeria Union of Journalists in Abuja, the News Agency of Nigeria reports.

Akunyili, who was represented by the Minister of State in the ministry, Mr. Labaran Maku, said the reforms would enable the media to play their required role in a thriving democracy.

The minister said the reforms should cover such areas as enforcement of professional ethics, capacity building and staff welfare.

Akunyili also called for a review of the condition of service of journalists to enhance their productivity.

'This is why the ministry recently set up a special committee to examine the salaries and emoluments of staff of Federal Government-owned media organisations and make recommendations for consideration,' she said.

The minister, however, said the report of the committee was still being awaited.

She called for partnership between the media and government to promote a new political culture, religious tolerance, value re-orientation, social development and the rule of law.

Earlier, the NUJ President, Malam Garba Mohammed, had urged the National Assembly to pass the Freedom of Information Bill.