Why Ekiti Indegenes Renew Call To Bring Back BIMBO DARAMOLA 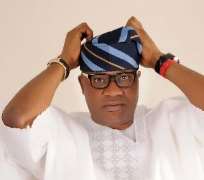 Without contradictions, Hon Bimbo Daramola is a stabilizer and a mobilizer and a very humble and true democrat who tackles issues dispassionately, always working tirelessly and assiduously towards achieving goals that have direct bearing on the life of ordinary Nigerians.

In the 7th Assembly he was one of the most outspoken federal legislators. Bimbo Daramola metamorphosed from a suave banker (precisely at Savannah Bank). Subsequently, Daramola co-founded Rucie Communications and became its deputy managing director. The company produced a documentary, titled From Prison to Presidency, which chronicled the life, times and works of former President Olusegun Obasanjo.

Under is leadership as chief executive officer of The Bridge Concepts Nigeria Limited, the company compiled and published JAMB Q&A: A Publication of Past Questions and Answers 1983 – 2004. The logo for the 18th Commonwealth Heads of Government Meeting 2003, CHOGM 2013 Abuja, which was held 5–8 December 2003 was designed by the Bridge Concepts.

Interestingly, Daramola lives a cosy lifestyle to a consummate politician who is daily surrounded by people of diverse status in life with the gift of the soap box.

There is no doubt that today his signature is evident in most of what can be pointed at as real development in Ekiti state in his constituency, both in Ikole and Oye Ekiti. Besides, many Bills, Motions and other quality representations can be traced to him. A lot of people consider this a major plus for his political leadership and vision.

In restrospect, as Chairman House of Reps Adhoc Committee on Land Swap in the Federal Capital Territory, Abuja, he was widely commended and celebrated by the underdogs and the downtrodden in the society who for many years had lost hope. Bimbo Daramola the astute and principled politician summoned all concerned stakeholders in the land scandal, and even expressed dismay why the government of that time failed in its promise to compensate over 854 indigenous communities of the FCT after 37 years their land was taken.

This humble and unassuming personality is expected to leverage on the goodwill, wide connections and respect which he enjoys from his fans not just in Ekiti State but across Nigeria. We are confident that our amibale PRESIDENT BUHARI will not hesitate in bringing men of integrity like this to be in his team to drive the CHANGE which Nigerians desire. I wish him best of luck.