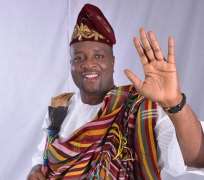 His love and passion for humanity and communal development have remained his mainstay. His thirst for human capital development has been the steam that spurs him the more. Unrelenting, youthful, steadfast and loyal political and philanthropic Matthew is no less a scion in the Benin nation and Edo Land. His labour and push for the good life for self and community, and the fruits derived thereof have been the sweetest pleasure.

When in 1998 (17 years ago), MAI joined the likes of Chief Tony Anenih, Chief Gabriel Igbinedion, Sule Lamido, Barnabas Gemade, etc to birth the PDP, making him (MAI) the youngest in the series, many people may have concluded that like others, he will abandon the PDP when the chips are down; that 17-year-old odyssey has translated to Matthew being a leading light in PDP and Edo land today. Edo youths, let us borrow a leaf from MAI.

Edo begs for help; we are faced with a systemic marginalization from the FGN's Financial Rights and Privileges, our roads are no less than deathtraps, Gelegele Port is now a sleeping giant, illegal sale of Edo lands to, and mindless encroachment by sister communities, industries are non-existent, youths roam the streets aimlessly, the young girl child is victim of rape and sexual harassment, the teenage boy is taking to drugs and bus conducting with Ring Road gradually becoming his home, there is hire-and-fire by the government of the day with high insensitivity to the plight of the people.

While there must be CHANGE, we must look to one like us, determined to serve, youth advocate, employer of labour, anti-oppression agent, a dogged grassroot personae passing through the eye of a needle on the local street of St. Saviour to the castles of the GRA, one that holds the ladder solidly for others to climb. A never-say-die PDP man who have stood solidly with the Party in turbulent times.

Disclaimer: "The views/contents expressed in this article are the sole responsibility of Morgan Eseosa Ewere and do not necessarily reflect those of The Nigerian Voice. The Nigerian Voice will not be responsible or liable for any inaccurate or incorrect statements contained in this article."
Articles by Morgan Eseosa Ewere
25-11-2015  #roadtoedo2016 - As Governor Adams Aliu Oshiomhole Winds Up And The Men Jostling To Take Over Osadeb1-11-2015  Building Strong Regional Trade Across Africa: What Pmb Can Do For Nigerian, African People4-9-2015  Good And Purposeful Leadership Decides The Direction Of Governance; Not Political Party30-8-2015  A Brief On Matthew Aigbuhuenze Iduoriyekemwen (mai) Jp2-8-2015  Prof. O.g. Oshodin Jp: An Immediate Past Vice-chancellor With Indelible Marks On The Nigerian PeopleMore...