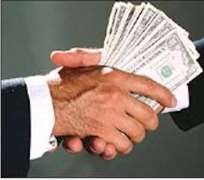 "Money and corruption are ruining the land, crooked politicians betray the working man, pocketing the profits and treating us like sheep, and we're tired of hearing promises that we know they'll never keep"-RAY DAVIES.

Corruption parades itself in many public offices in Africa, as politicians keep mismanaging and diverting public funds into personal use which are supposed to be used for continental development. Money laundering is also a fashionable trend in the continent.

It has also thrown Africa into a state of poverty as office holders finish their period of service and we can't point to any structure put up for the poor and jobless of which the youth forms the larger population, yet the lucky ones among us embrace and support them when they are held to ransom.

Corruption is very wrong, It undermines the integrity of all who are involved and damages the fabric of the organization to which they belong. It is a major hindrance to sustainable development, with a disproportionate impact on poor communities. It impedes economic growth, distorts competition and represents serious legal and reputation risks.

According to Transparency International in 2013, Africa still suffers from the deadly menace of corruption. Its effects on this part of the world are obvious as the younger population across the continent from Kenya to Rwanda to Botswana to Angola, are obviously unemployed according to the statistics available.

Corruption is to the African continent what Cancer is to the Body! It thrives across Africa and as a cancer it spreads and manifests in diverse ways. There are more or less aggressive kinds, but all of them lead to a degraded Africa.

My heat bleeds when youths of this continent publicly pledge allegiance to "publicly" declared corrupt individuals and it goes to show the the kind of system that's been created by past leaders.

Irrespective of our gender, ethnicity, religious or political affiliations, there is a need for the younger population to stop the support given to public office holders who have been deemed corrupt.

#SayNoToCorruption
God bless Africa.
Connect with me on Twitter: @o'labieleniyan