Redeemed Germany Led The Welcome Of Refugees & Bailed Out Greece 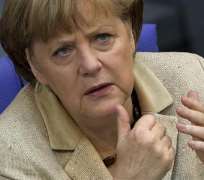 Why are Arabs and Africans not risking ignominy and dear lives to cross into rich Arab, African countries rejecting them? There is this African saying about a lizard that jumped all the way from the top of a building. It looked to the right and then to the left, there was nobody praising it. He then nodded its head up and down. If nobody praised Germany, Germany should praise itself. Germans have shown leadership again in refugee crisis; for how long we do not know.

Once upon a time there were such countries as Nigeria, Libya, Lebanon and Jordan. All comers were welcomed as Africans are their brothers’ keepers with pride of accommodation just as Germany has shamed western countries into taking responsibilities for mess they created. Not part of the military adventure that created refugees, too busy bailing out bankrupt Europeans.

Poor Ghana, Nkrumah was so consumed, there was no African country he did not want to bail out or liberate from the yolk of colonialism. To our children, those are histories now, they want to know what Africa is doing for itself today to secure their future, so that they do not become the refugees. Indeed, some of our children are on their way to Europe based on false sense and temporary welcoming gestures. It has been made clear that only Syrian refugees are welcomed.

We must caution them that Germany tolerance today; what other western countries are forced or shamed to follow is only temporary until more batches of refugees surged to Europe. The Neo-Nazi are already demonstrating wondering if Angela Merkel has gone bananas. Though she is supported by two third, you can bet whatever that she has no future political equity left, after her leadership of generosities to refugees and bail out of poor European economies.

The riots and demonstrations by refugees and migrants invading the Greek island of Lesbos, in a country trying to survive, have been overshadowed by even direr condition of refugees in Hungary. Poor countries that are going through hard times cannot be expected to be generous as Germany. Even then, we do not expect Germany to spread the welcome mat indefinitely.

One incident of an Afghani man messing up Koran among the refugees in Hungary generated so much publicity because he was chased and had to be rescued by the police. Otherwise he could have been lynched. Religion is such a very powerful weapon even in the face of hunger, misery and squalor, there are those willing to risk deportation back to where they were fleeing from if they could not lynch the man that desecrated the Koran.

It makes their hosts wonder if these are genuine asylum seekers or soldiers in a “Trojan horse”. Once they settled down, the extremists and Neo-Nazi would quickly use this act against them and the authorities might even use it to screen those that might eventually gain admission while the radical fighters that wanted to lynch the Afghani who desecrated the Koran are sent back home. One country came out and said it out that they are a Christian country.

Refugees that are more desperate have decided to repent “their evil ways, reject the devil and accept Christ as their Savior”. For now Mohammed and the Koran can go to hell for not coming to their aid when they needed him most. They are ready to be baptized so that they can easily gain asylum because sending them back after Christianity conversion means death punishment. So when Christ said man cannot live by bread alone, he was not talking about these refugees.

Hungary gave cold treatment and Denmark told refugees not to come. After all the publicity of rough treatment published in the press, it is surprising some of the refugees were staggered by the treatment they encountered in the land of freedom and liberty as preached and expected.

Britain’s response in the face of the present immediate suffering is to admit 20,000 between now and 2020, only from the refugees that apply in their home country. Well, Mr. Cameron the Prime Minister of Britain, did not say never. But it makes one appreciate courage of Chancellor Merkel, what Jordan faced with so many refugees while rich Arab countries rejected them.

There are those claiming President Obama should come out more forcefully about the plight of the refugees. This is unfair, there is no President or Chancellor that has taken more abuse for fighting for refugees and migrants than Obama. He still has the ongoing battle of the children of undocumented migrants called Dreamers on his hands; that he gave temporary relief by Executive power. Yet, he has also given other class of refugees temporal relief.

President Obama was chased by the Dreamers and Hispanic activists until he gave temporary relief to some of the 11 million undocumented immigrants. It was challenged in court putting it in a limbo. If the same activists can only pursue other political leaders the way they pursue Obama. Indeed, opponents are scoring political points by promising to reverse the President’s Executive order on immigration.

President Obama made it clear during a question and answer period to a Nigerian that he wants those that have acquired skills and that have been exposed to democratic form of government to go back home and change the system instead of hoping for Presidential order to stay in United States. The brain drain must not deprived African countries of their most cherished possession which is the new generation of leaders that will help change the system.

It must be recognized that there are not enough countries that can accommodate all refugees that want to leave their countries for either economic or civil war reasons. It also makes sense that if migrants value democracy, capitalism and freedom practiced in the countries they love to relocate to, they must strive and achieve it at home. Most of those paying exorbitant fees to get smuggled out of countries are rich and middle class that could have changed their system.