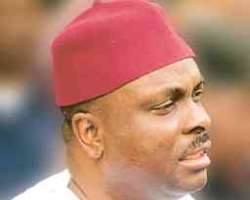 Ibori, according to the anti-graft agency, is wanted for alleged official corruption and money laundering.

It said in a statement by its Head, Media and Publicity, Mr. Femi Babafemi, that a court warrant had been obtained for his arrest.

The statement, however, did not name the court, the judge and when the arrest warrant was issued.

When contacted on the missing links, Babafemi said the name of the judge and his court were being kept under wraps to avoid undue pressure on the agency by Ibori and his sympathisers.

But Babafemi explained in the statement that letters inviting the former governor for interrogation had earlier been sent to his addresses in Lagos and Abuja, before the decision to declare him wanted.

He said, 'Following persistent public enquiries over the status of the case involving the former governor, we will like the public to know that Chief Ibori is wanted by the commission for interrogation.

Our correspondent gathered that the letters specified that he should surrender to the commission on March 23.

The letters, it was further learnt, asked Ibori to avail the anti-graft agency the necessary documents that could help it in the course of its investigations.

The commission, it was learnt, would have promised a reward to anyone that could provide information on the whereabouts of the former governor but wanted to accord him 'some respect and see if he would reciprocate by surrendering himself.'

However, Ibori, in a swift reaction to the statement denied receiving any invitation from the anti-graft agency.

He vowed in a statement by his Media Assistant, Mr. Tony Eluemunor, to 'challenge EFCC's political persecution.'

Ibori said that his being declared wanted was a 'political harassment that demands for vigourous legal challenge so that Nigeria is not ruled like a fiefdom.'

The former governor advised his supporters not to panic because up till today (Tuesday), no letter inviting him for questioning from either the EFCC or any other security agency, had been received in any of his houses in Abuja and Lagos.

But the anti-graft agency debunked Ibori's claim that he had not been invited.

The commission confirmed that an invitation letter to him was dated March 22, 2010 and that he was expected to have faced EFCC interrogators on March 23.

An EFCC source claimed that Ibori's associates had been in contact with some operatives through the telephone since the invitation was sent to Ibori.

'These associates have been pleading with the EFCC to allow the operatives to visit Ibori in Warri, Deta State, to take his statement rather than him visiting the EFCC headquarters in line with the invitation letter but we turned it down,' he said.

Ibori, who until President Umaru Yar'Adua's sickness was a prominent visitor at the Presidential Villa, had not been visible at public places since the emergence of Dr. Goodluck Jonathan as Acting President.

A source close to the former governor, said his decision to 'lie low' was taken about three weeks ago when his political associates met in Asaba and reviewed the political situation in the country.

SATURDAY PUNCH had exclusively reported on March 27 that Ibori might be quizzed by the commission following a fresh petition written against him by the Delta State Elders Leaders and Stakeholders Forum.

Copies of the petition dated March 8,2010, were sent to the Delta State Governor, Dr. Emmanuel Uduaghan; the Attorney-General of the then Federation and Minister of Justice, Prince Adetokunbo Kayode(SAN); and the Governor of Central Bank of Nigeria, Mr. Lamido Sanusi.

The forum had demanded the commission to find out whether it was right to use the state government's shares to obtain a N44b private loan from a bank.

They said there was evidence that shares worth N528m in Oceanic Bank belonging to Delta State Government was used to guarantee the N44b loan to Ascot Offshore Nigeria Limited by Intercontinental Bank Plc.

An EFCC source had then informed our correspondent that the petition against the governor by Forum was too weighty for the commission to ignore.

Ibori was first arrested by EFCC operatives when Mallam Nuhu Ribadu was the commission's chairman. He was charged to a Federal High Court in Kaduna.

The case however suffered a setback when the Court of Appeal, Kaduna ruled that the high court did not have jurisdiction over the matter and that Ibori should be charged in his state.

He was subsequently arraigned in Asaba before Justice Mercy Awokulehin, who discharged him of all the 170- count charge against him.

The commission have since appealed against the ruling.