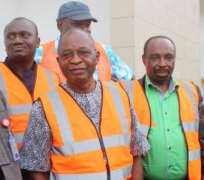 Sequel to the prediction and insistence by the Nigeria Meteorological Institute, that the intensity of rainfall will increase in September and October this year, the Anambra State Emergency Management Agency, SEMA, has renewed its call on the citizenry to be on their guard against imminent flood disasters.

The Executive Secretary of SEMA, Chief Paul Odenigbo noted that SEMA had already in collaboration with the National Emergency Management Agency, NEMA, and some members of the Executive Council, EXCO, toured flood-prone local government areas of the state two times in the last three months.

He stated that the flood enlightenment team had taught the people measures they need to take in order to minimize the adverse affects of the imminent flood disaster and also save lives.

The SEMA boss identified the flood-prone local government areas as; Anyamelum, Anambra East and West, Ogbaru, Onitsha North and South, as well as Idemili South and Awka North, in addition to Ekwusigo and Ihiala.

You may recall that SEMA is one of the near-moribund agencies of the State Government revitalized and equipped by Gov Willie Obiano for maximum productivity.