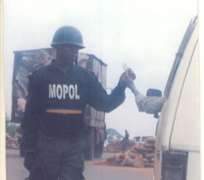 (Public Security & Civil Liberties, Onitsha Nigeria, 28th August 2015)-The attention of the leadership of International Society for Civil Liberties & the Rule of Law (Intersociety) is drawn to a recent public warning issued by the Commissioner of Police, Anambra State Command, Mr. Hosea Karma over the reckless use of sirens and covered plate numbers by private citizens particularly politicians and business moguls of credible and banditry backgrounds. CP Hosea Karma had in the warning statement blamed members of the public as being solely responsible for the abuse and disclosed that he had ordered his officers to commence manhunts for their “defaulters”, and that any defaulter caught will be arrested and prosecuted. He also, by his statement exonerated his officers from any responsibility and culpability. The link below credited to a leading online newspaper ( Nigerian News Express) is the referenced public statement: ( http://www.newsexpressngr.com/news/detail.php?news=14467&title=Police-warns-against-use-of-siren,-covering-of-plate-number-%E2%80%A2Begins-clampdown-on-defaulters-in-Anambra ).

Flimsy excuses such the one being complained and condemned (abuse of sirens and use of covered plate numbers) have periodically been devised by the authorities of the Anambra State Police Command now under CP Hosea Karma to flood Anambra roads with police extortionist roadblocks. Just recently, the State Police Command flooded Anambra roads with its officers in utter disregard to the superior orders of the Inspector General of Police, Mr. Solomon Arase; claiming that “ it is enforcing Governor Willie Obiano’s restriction of public and private motorcycles on a number of roads in Anambra State”. Some officers of the Command were seen in several places that have nothing to do with restricted road areas, arresting and extorting with reckless abandon. The Command also engages in negative security (punishing and maltreating citizens for being law abiding under false criminal accusations).

The latter are fully backed by the Nigeria Police Force particularly officers of the State Command. They steadily constitute public nuisance on the roads by operating like criminal gangs escaping policing manhunts. For instance, banks bullion vans squads are escorted by the Police using their siren blaring hilux trucks. Their menace on the roads is shocking and alarming. Most of them operate with covered plate numbers. Again, business moguls and politicians in long convoy are also escorted by armed police personnel using publicly procured siren blaring security trucks; blaring sirens and engaging in driving styles and speeding with reckless abandon.

In the past three Christmas seasons of 2012, 2013 and 2014, investigations carried out by Intersociety revealed that 80% or more of business moguls and prominent politicians that include white collar bandits residing abroad, who returned for Christmas holidays; were escorted by officers of the Nigeria Police Force including those of the Anambra State Police Command, using publicly procured siren blaring security trucks. Some of them went as far as hiring military personnel for security, intimidation and show off. We consider these as a height of commercialization and abuse of public security by the authorities of the NPF including Anambra State Police Command. It saddens and surprises us that the same Police Command of Anambra operational base could turn around and point accusing fingers at innocent civil citizens, with intent to harass, intimidate and extort.

Similar to these is the introduction of commercialization of the so called “tinted vehicle glasses” by the same Nigeria Police Force (NPF) particularly the Anambra State Command. The NPF has till date, maintained a culture ofcommercialization of public security through all sorts of infantile security excuses including authorization to use tinted glasses and sirens, possession of fake driver’s license and vehicle papers, roadblocks, nipping points, suspicion of criminal wrongdoing, etc. In the case of use of tinted glasses, any sun shielding windscreen is categorized as “tinted glass”. Sadly and shocking too, politicians and business mogul of credible and banditry backgrounds are exempted because of their proneness to brown envelopes and bribery. Each ordinary private vehicle owner with factory fitted sun shielding windscreen is coerced into spending between N30, 000 and N45, 000 as case may be, in the hands of the NPF, in obtaining the so called approval for tinted glass.

Other than the foregoing, the Anambra State Police Command under CP Hosea Karma has also bounced back with utter alacrity in all sorts of extortionist activities powered by illicit police roadblocks across the State particularly in Onitsha and Nnewi commercial cities. At Upper Iweka/Aba Park area, corrupt officers of the Okpoko Police Station operating mostly in mufti are in charge. Generally across the State, open extortion of commercial motorists, tri-cyclists and motorcyclists are still going on though in a reduced speed following reduction in police roadblocks and changes in extortion patterns, which have now been shifted and heavily placed on private motorists; in the form of checks of drivers’ licenses and vehicle papers. General or official checks on vehicle particulars done announced and periodically have been replaced with random, unannounced and frivolous checks; all with intent to intimidate and extort innocent members of the public.

Finally, we wish to warn for the very last time the Anambra State Police Command under CP Hosea Karma to put its house in order and purge itself of all sorts of extortionist and corruptive activities particularly on the State roads. In the world over and in modern science of crime, crimes are not fought by mounting reckless and indiscriminate roadblocks. This is because police roadblocks are confirmed triggers of crime and corruption, which in turn, lead to unlawful homicidal conducts including torture and extra judicial killings.

The State Police Command must obey the firm directive of its Inspector General of Police by dismantling with immediate effect all roadblocks on Anambra roads other than those belonging to the Federal Highway Police and special ones created and designated with spots by the Government of Anambra State for its control of violent crimes. Since the Buhari administration says it is fighting corruption, we have expected the anti corruption posture to first show in the faces and conduct of the Nigeria Police Force particularly the Anambra State Command under CP Hosea Karma.

As for the CP’s order to his officers to flood Anambra roads with roadblocks so as “to catch the defaulters of reckless use of sirens and covered plate numbers”, we demand the immediate reversal of the directive owing to its unpopularity and derogation from the IGP’s guided police road presence policy. Importantly, the CP Hosea Karma-led Anambra State Police Command should beam its searchlight inward or towards its own confines as the aider and condoner of reckless use of sirens and covered plate numbers. Members of the public in Anambra State must not be subjected to undue police roadblock harassment, intimidation and extortion and punished for misconducts that are unknown them, but known to the State Police Command in all intents and purposes.

This stern warning of ours has monumental administrative, legal and image consequences if ignored by the warned. Our capacity and competence to shake the foundation of the Anambra State Police Command locally, nationally and internationally if these clarion calls go unheeded, have no iota of doubt. The panned actions of ours and other grounded rights based civil society organizations in the State and beyond will include compilation of number of unapproved police roadblocks mounted across the State roads, capturing in secret cameras of their extortion scenes and acts, exposition and internationalization of corrupt practices of the Command, joint press conferences for the removal and administrative quarantining of senior commanders of the State Command including CP Hosea Karma, official petitions or written representations against the leadership of the Command to the appropriate quarters, and public interest litigations aimed at exposing and curbing the corruptive and homicidal conducts of the Command.

As a leading public security oversight civil society organization in Anambra State, recognized and encouraged by the Government of Anambra State and beyond its borders, Intersociety will no longer allow the State Police Command to have a field day as it concerns all manners of policing misconducts including the issue under reference, which amounts to “arresting and punishing John over the drunkenness of Peter”.

Note: The attached pictures are those of officers of the Anambra State Police Command caught by Intersociety extorting N50.00 notes from commercial motorists on Onitsha-Enugu and Onitsha-Owerri Dual Carriage Ways in November 2011.