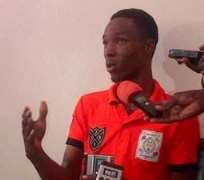 That Fejiro Oliver is today the biggest nuisance on social media is no news. What is essentially news at the moment is that this tinny crude criminal has extended his scope of insanity to “pen-brushing” Olorogun Otega Emerhor, a personality who was already a highly successful man before he (Fejiro) was conceived in his mother’s womb.

In his latest attacks on Emerhor and the All Progressives Congress (APC), this tinny worm who feed fat via BLACKMAIL and PEN ARROGANCE painted a false picture describing Olorogun Emerhor as a “Bully”, a character Fejiro says dated back to his early days in college.

Fejiro, perhaps was Otega’s classmate in the secondary school for him to know that this man of inestimable value was indeed a “bully”. It is a known fact that at the time Emerhor passed out of college; Fejiro has not been formed. His mother was still a teenager. It is a pity that this young manin his early 30s has suddenly gone hay-wire, dancing naked on social media.

He is gradually paving the way for his final exit from sensational journalism.

I therefore present to you FEJIRO OLIVER: He is a very skinny crook and a fast talker. His telephone numbers are in the region of 15 lines comprising of all telecom networks in Nigeria.

He worked briefly as a Reporter for the Nigerian Television Authority (NTA) and was dismissed for gross misconduct and unscrupulous activities prohibited in the Pen Profession. Fejiro extorted both high and low in the society through extreme practice of sensational Journalism on social media.

Fejiro blackmailed and tried to extort money from ex-Governor Uduaghan but failed. The bitter truth is that Fejiro will give OKOWA a hard knock sooner than later.

His social media news portal: SECRETREPORTERS is coined to have the flavor of SAHARAREPORTERS, so as to beat and bite his victims.

SecretReporters is today a mere Public Relations platform for Senator Okowa and nothing more which is why some concerned Deltans are now pressing for the tracking down and arrest of this social media miscreant. He wants to be a multi-millionaire through blackmail and deliberate falsehood.

Oliver stories on social media have no clear cut message. He goes back and forth in trying to put across information that would yield for him some income through blackmail. Oliver is a restless individual who is afraid of the wind, sun and the moon.

He is always scared and would tell his caller that he is in CALABAR even though he was seen few minutes ago across the road. His ambition is to make it big through blackmail in the social media hence nothing on earth can stop this SKINNY CRIMINAL from pressing forward until he ends up in GALLOW in the near future.

What is strange in all of these is that Senator Okowa decided to adopt this serial criminal who was sacked by the authorities of the NTA to be his Media Consultant and Head of his social media campaign team.

Of a truth, the Okowa’s caretaker administration lacks credibility and the Peoples Democratic Party (PDP) in Delta State ought to advise Okowa on how best to manage his social media team. But alas, only fantastic criminals can best serve the PDP and Okowa which is why people with questionable character are rewarded daily since May 29.

Fejiro has travelled across the length and breathes of Nigeria, blackmailing and extorting money from whoever falls into his smart antics. His major targets are high ranking politicians and senior public office holders.

FEJIRO’S BLACKMAIL AND EXTORTION: His blackmail madness took him to Niger State where he cooked up some TERRIBLE LIES with a view to extorting over N500 million from the then Governor of Niger State, Aliu Babangida. The ex-governor waited patiently, playing along until Fejiro Oliver was picked up by smart guys from the State Security Service (SSS).

He spent several months at the underground cell of the SSS before his current pay master; Senator Ifeanyi Okowa came to his rescue. Okowa did the magic, using his high level connections as a Senator of the Federal Republic of Nigeria to prolong Fejiro’s days on earth. This is the root of his loyalty which gave birth to the crusade of “OKOWA IS THE BEST MAN IN NIGERIA.”

The insanity that is now rearing its ugly head in Fejiro’s social media Journalism is largely connected to his desire to appreciate Senator Okowa for rescuing him from the DARK ROOM of Death. Fejiro would have been a forgotten GIZZARD at the underground cell of the SSS if not for the intervention of the caretaker governor of Delta State, Senator Ifeanyi Okowa.

As it is today, Fejiro Oliver has reached his pick of “pen arrogance” and cheap blackmail. It is a well known fact that Olorogun Emerhor was already a consolidated achiever before this tinny crook called TEGA (Fejiro) was conceived in his mother’s womb.

It is also a confirmed fact that the BULLY story as told by this DISGRUNTLED CRIMINAL is far from imagination. It is an extreme kind of loyalty to Okowa.

The BLACK OWL will henceforth flyover where ever Fejiro is cooking blackmail and make reasonable efforts to help him fan the fire until he is finally swallowed up by the carnivorous worms in the deep soil.

Olorogun Otega Emehor is not moved, not disturbed and not bitter about Fejiro’s insanity. He’s pressing forward constantly like the woman with the issue of blood; aiming at the target which is to free Deltans from the over 16 years of socio-economic slavery, poverty, unemployment and acute hunger.

The battle for the soul of Delta State cannot be thwarted by a tinny skinny criminal called FEJIRO OLIVER of the OKOWA HALL OF SHAME. He has finally confirmed that his heart is wicked, his pen is evil and his future is blink.

MY FINAL TAKE: I have carefully x-rayed Fejiro Oliver. This crude pen criminal should be kept in arms-length. It was my very good friend of over 30 years, Mr. Nobert Chiajor - Chairman of the Nigerian Union of Journalist (NUJ) Delta State Chapter who first warned me concerning the atrocities of Oliver.

He told me that Fejiro had been blacklisted and de-listed from the scroll of the NUJ because of his unscrupulous practices. He sincerely further advised me to stay away from this RAW BRAT who will never stop blackmail and extortion. I now have all the reasons in this world to quickly delete Fejiro’s contacts and numerous phone numbers from my list of close external relations.

It is a truism that when THINGS fall apart the CENTRE can no longer HOLD. The battle line is drawn and Fejiro must of a necessity be ready to dance to the rhythm of the EVIL DRUMMER BOY while Okowa’s caretaker administration will reap the gains of Fejiro’s intellectual insanity and unscrupulous activities across the land.