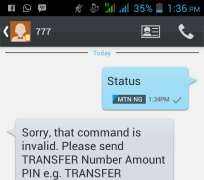 The number 777 is a service number used by Glo to check BBM subscription status and used by MTN to transfer airtime.

Since I started using MTN there is nothing I have enjoyed satisfactorily free from MTN. Even their so called costumers service free call, one-way-or-another I pay for it directly or indirectly.

The level of scam of this network provider(MTN) is so annoying that it doesn't just insult my intellectual acuity, it frustrates my state of peace. For instance.

Subscription:
It is insulting that rather enjoy a full unlimited mobile data access for a daily, weekly, monthly service(s) as the subscription packages are called. MTN will only allocate peanut megabytes that are never customer's satisfactorily enough suppose one have to download one (1)motivational speakers video, one (1)YouTube entrepreneurial workshop video, two (2) online PDF textbooks relevant to ones profession. Other network providers are no exemption.

Indistinctive Charges:
It frustrates that some online services which could have required mobile data services, like topping up airtime using bank mobile services, MTN charges users directly from their airtime credits. What then can one say of MTN charging as high as four(4) naira per SMS and not to mention the incomprehensible reason for higher charge tariff when calling another network from MTN?

Unreliable Network Provision:
Each time I try to balance the Economists theorems applied by MTN on customers I seldom agree it is their fault with reasons that they are doing all they can to keep network service provision available. However their irresolute network fluctuation keeps betraying that reasonableness of mine as on daily basis lives and properties are put to risk as a result of their epileptic network failure.

Indiscriminate SMS Alert:
From renaissance MTN is known for sending users all sorts of messages. I have also seldom agreed it is their fault with reasons that bulk SMS have given rise to duplicity of nomenclature. Nevertheless my reasonableness is again betrayed and what I have just received as SMS is a confirmation that MTN in collaboration with NCC are deliberately taking their customers simplicity as stupidity and persistently rapping the purses of Nigeria's poor helpless masses.

Paralytic NCC protocols and Directives
Often times unknown callers get away with their threats and spoils knowing fully well that finding a trace remains paralytically impossible as there's always a sophistry excuse from network customer's care that protocol and directives from NCC prohibits tracing unknown callers who are threat to one's life. As the suggestion goes that NCC is neither equal nor capable to the task required of their job description, it is not just a national profligacy financing NCC but the many practices which aides corruption through irresponsibility.

Attached are screenshots of the message I received from MTN service number 777.

I was to check my Glo data balance when I mistakenly sent the message "Status to MTN" and MTN replied with a message directing me to transfer airtime to an unknown valid registered MTN number.

What I received as SMS affirms the allegation that MTN do subtracts from every customer one(1) naira into the account of a registered number known to them each time airtime is loaded using *555*1*pin#. The implication that if 40% of Nigeria's population recharges 40% the populace are scammed unavoidably.

As the certainty abounds that users who received this misleading message (which is still in circulation as you can confirm with the dates on the screenshots or by sending status to 777 using MTN service), many whose transfer pin is 1234 might have fell victims of this green snake under the green grass extortionists.

MTN at this point should be sued for being the medium used for this impetus gross extortion, gross irritating emotional devastating SMS, gross rampant psychological frustrating notifications.

Likewise, NCC should be sued for gross negligence of duties as seen in their lousiness to control duplicity of network IP, yes, they are accomplice.

This done will hopefully serve as a deterrent on further mistakes by MTN or any other network providers. If done, will also bring about sanity and diligence of our telecommunication systems.

I put it to them that it is a shame answering big names and nothing to show for satisfaction of their giant educational titles and echelon.

Judging from the products of my university I forbid to hail their efforts for the much which this country has given them (professors) through salary and incentive, they have given the country little or nothing back.

The government of Nigeria is suffering not because we have weak people but because we have weak institutions. I will be lying to say it is unfortunate to blame our professors for deforming our national probity when they have failed to pioneer and project check and balances through their less/never concerned contributions.

Be charged in your capacity as professors to arise and help Nigeria's government. She needs your big name, giant titles and brain to move forward.

Wake up from slumber, nurse not your silence in chains waiting for miracle to make life better for Nigeria's generations. Your silence is eating and sucking up the blood of the economic development of Nigerians generations yet to come.

Carry out researches, suggest solutions and implement strategies for a better Nigeria.

We are in the era of information of which through our telecommunication system if improved we might have solved 15% problems of corruption in Nigeria.

I wish my voice counts that we as citizens deserves fairness for justifiable utility charges on goods and services. I speak hopeful that this message be carried that we shall not as a country continue to fold our hands and watch ourselves decisive ourselves.

Today being 17th August 2015, rather than rejoicing with my fellow finalist, students of Michael Okpara University of Agriculture Umudike for the successful completion of our first degree. My gaze towards the wall outside the university community leaves me with shock knowing that there is little or nothing for me to be hopeful about.

Unfathomably irked by this SMS, as a full pledged citizen of the Federal Republic of Nigeria cognizant that 20% or more of MTN users share and sell transfer pin is 1234, I make the following demands from MTN within 72hrs.

1. To send an apology SMS to all MTN users which must include that the number in circulation from MTN share and sell service number 777 has been removed.

2. Render a public explanation which must include the identity and the intention(s) of the bearer of the number included in that misleading SMS from 777.

3. Refund all who fell victim of the prey.
Corruption everywhere, needs everyone to fight it through alertness and awareness the task is not for the presidency alone.

Let us say enough to the nonsense which have left our beloved country Nigeria in coma that it may be well with Nigeria.