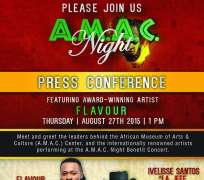 The weekend culminates with the main event, AMAC Night, a fundraising gala and award ceremony honoring local dignitaries, philanthropists, business and community leaders. The program will be held on Saturday August 29th, 7:00 PM – 2:00 AM at the Nine 0 One Event and Conference Center, located at 901 NW 183rd Street, Miami Gardens, FL 33169. Tickets can be purchased on Eventbrite at www.AMACBenefitConcert.eventbrite.com .

An initiative of our Miami-Dade County District 1 Commissioner Barbara J. Jordan and Miami-Dade Board of County Commissioners, the AMAC center is a proposed 5-6 million dollar project that is expected to house the largest collection of indigenous African art and artifacts outside of the African continent.

The promise of the AMAC center for promoting tourism, international exchanges and economic growth and enrichment for the local Miami Gardens community is unquestionable. The City of Miami Gardens is one of the most culturally diverse cities in South Florida, and the largest city in Florida with a majority African American population. It is a natural host city for the premier museum of African culture in Miami-Dade County. Pre Gala Concert tickets can be purchased on Eventbrite ranging from $50 - $120. Local artists will also have the opportunity to display their talents in the Got Talent segment of the night’s entertainment from 6pm to 8pm. The most talented artist or group could win a $250 cash prize and trophy, plus an opportunity to take the stage with featured artist Flavour during his performance later in the evening. The registration for solo artists is $25, groups (less than 5) are $50 and large groups are $75. The competition categories are 8-12 years, 13-18 years and 18 and above.

“Culture is the bedrock of any civilization. Wherever you find a thriving culture, there is economic activity generated for the local community. It is exciting to see Miami Gardens growing as a magnet for local and international cultural activity,” explains Councilman Ighodaro. Please visit www.AMACBenefitConcert.eventbrite.com for more information.

About the City of Miami Gardens
The City of Miami Gardens was incorporated on May 13, 2003, and is the 33rd city in Miami-Dade County. With a population of approximately 110,000, it is the third largest city in Miami-Dade County. Miami Gardens is a solid, working and middle class community of unique diversity. It is the largest predominantly African-American municipality in Florida and boasts many Caribbean and Hispanic residents. The City hosted the 2010 FedEx Orange Bowl, the 2010 NFL Pro Bowl™, Super Bowl XLIV™, 2013 Orange Bowl and 2013 BCS National Championship game. The City has demonstrated steady growth in the areas of community and economic development, and has gained a reputation for being a hot destination in South Florida. www.miamigardens-fl.gov .