God And Buhari Will Judge You, Rivers APC Tells Wike.....Congratulates Peterside For Victories At Election Tribunal 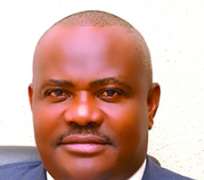 The Rivers State Chapter of the All Progressives Congress (APC) has told the caretaker Governor of the State, Chief NyesomWike, that he will not escape judgment in the hands of God and from the Muhammadu Buhari Administration.

“Chef Wike can only run but cannot hide. He ought to be in prison on account of his atrocities and not in the Government House. Almighty God will certainly judge him and so, too, will the Administration of President Muhammadu Buhari, which does not brook any illegality,” Rivers APC said in a statement issued Tuesday in Port Harcourt by its Chairman, Dr. Davies Ibiamu Ikanya.

The party was responding to Wike’s statement during a church service on Sunday in Port Harcourt, in which he declared that God will disgrace those opposing his occupation of the Rivers State Government House. “We wonder which God Chief Wike is referring to that will disgrace those opposing his illegal government. As much as we praise those that are trying to make a Christain out of Chief Wike overnight, we in Rivers State know very well his religious inclination. We wish to tell him that the God we know is a God of righteousness who can never be on the side of those engaging in criminality and murderous acts. We are convinced that at the appropriate time He will bring judgment on Wike and those that have brought hardship to Rivers State and her people,” Rivers APC said.

The party noted that, going by the monumental corruption perpetrated by Chief Wike during his tenure as Minister of Education and the killings that took place during the last elections in Rivers State, Chief Wike should by now cooling his heels in a maximum prison. “But it is not late yet; there is no way he can escape judgment as he must account for the blood of our people massacred during the elections,” the statement said.

Rivers APC commended the Chairmen and members of the Tribunals handling the electoral cases in Rivers State for rejecting the evil overtures of Chief Wike and his sinking Peoples Democratic Party (PDP) and for standing by the truth in their rulings so far. “We also congratulate our meritorious gubernatorial candidate, Dr. Dakuku Peterside, and his legal team for winning all their cases so far and surviving al the booby traps put up by Chief Wike and his legal team. To the Rivers State people, we appeal to you all to continue to endure the visionless government of Chief Wike as it is matter of time before it is thrown to the dustbin of history where it rightly belongs,” Rivers APC said.