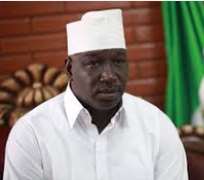 The Secretary to the Borno State Government, Alhaji Usman jidda Shuwa has issued a statement which officially confirmed the passing away of Zanna Umar Mustapha the Deputy Governor.

The Statement reads:
"It is with deep sense of utter shock and disbelief but with complete submission to the will of the Almighty Allah that the Borno State Government hereby announces the passing away of His Excellency, Alhaji Zannah Umar Mustapha, the Deputy Governor of Borno State.

" He died in his sleep this morning in Yola, Adamawa State where he was to represent Borno State Government at the convocation ceremony of Modibbo Adama University of Science and Technology, Yola. He was also scheduled to follow up on his earlier visit to Yola, in connection with the welfare of Borno State citizens internally displaced as a result of the Boko Haram insurgency.

"His remains would be brought to Maiduguri for funeral at the Government House, Maiduguri at 4pm today, Saturday, 15th August, 2015. He will be buried in Maiduguri.

"May his gentle Soul rest in perfect peace."

Zanna Umar Mustapha had served the Nigerian Navy before venturing into active politics which culminated in his election as the Deputy Governor to Governor Kashim Shettima in 2011 and reelected in 2015.