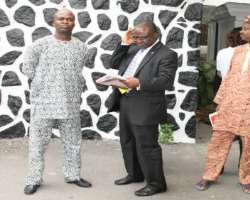 The accused persons; Akinwunmi Solomon Fabunmi, Toyin Odesile, Ayoola Ayinde, Bayo Dada, Oluwatoyin Oyelade and Ayodele Thomas pleaded not guilty to all 12-count charges bordering on money laundering, illegal transfer of depositors funds, criminal conspiracy, fraudulent conversion and fraudulent withdrawal. However the seventh person Mr. Raymond Obieri who was a director of the bank could not be arraigned with the others because of an illness.

The accused persons had allegedly withdrawn over N18 billion naira from the bank on the pretence of using the funds to purchase shares between March and June 2009.

They were jointly represented by 11 lawyers and are remanded in the EFCC custody by the judge.

Their bail application will be heard on January 6, 2009