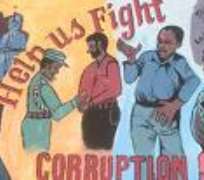 I read with consternation that a purported National Peace Committee led by a former Military Head of State, General Abubakar Abdusalaam (rtd) met with President Mohammed Buhari to plead with him to go softly on corruption and its perpetrators. According to news reports, the so-called Peace Committee “was a stepped up version of previous failed attempts to sway Mr. Buhari from his determination to probe acts of corruption by officials of Mr. Jonathan’s administration.”

Looking at the membership of the so-called National Peace Committee, one could not but be embarrassed for this country. A country whose its eminent personalities have no shame; where those who are supposed to be purveyors of integrity and probity are the one championing corruption and decadence; where those who the young and upcoming should look up to for clear directions but are themselves confused because of greed and unmitigated kleptomania. It is hurtful. It is disappointing. It is harmful.

Corruption has become so pervasive that carpenters could no longer be trusted in our system. Mechanics could not be counted upon to do the right thing. Bricklayers could not be left alone for few hours. Traders could not be trusted not to inflate their wares. Guards kill their employers. Kidnappers have gun berserk seeking higher ransoms. Armed robbers have become more audacious. Every fabric of our society has been infected.

It is so bad that Nigerians have become so frustrated about their government’s failure to enforce the law. This is because presidents are worse than armed robbers. The Attorney Generals have become enablers of looters. Majority of the Federal Ministers were scum bags. Most governors were and are still bandits. Their commissioners were and are still collaborators in the fleecing of their peoples. The judges now sell justice to the highest bidder. Nigerians now go into the Police Force so that they could collect bribes and get rich quick. It is so nauseating to the extent that everyone has come to the conclusion that the first thing to do to restore sanity in our polity is to fight corruption.

So, how come this so-called National Peace Committee missed it? What were they thinking? Are they so removed from reality that they could not feel the pulse of the people? Are they that mean and unfeeling that they could not care about the feelings of the generality of Nigerians? Are they just concerned about their pockets and not the rest of us? Don’t they think of the present and the future of this country? How could they be so blinded to the frustration of Nigerians about corruption?

We cannot be surprised by the lack of conscience on the part of someone like General Abdulsalaam who is corrupt to the bone. He is yet to explain to Nigerian how he came about the $10million he donated to a Chicago University. We cannot be caught unaware by the thoughtlessness of Ayo Oritsejeafor, the so-called president of the Christian Association of Nigeria (CAN) who allegedly turned Arms buyer. The shamelessness of Cardinal John Onaiyekan should not flabbergast anyone. Was he not the one who advocated for the arrest of General Mohammadu Buhari for warning against rigging of elections a while back? We have not forgotten his anti-people postures during President Goodluck Jonathan era. We cannot be surprised about some of the characters who populated this now infamous National Peace Committee.

But many of us are embarrassed to see in this group, Retired Commodore Ebitu Ukiwe who remains a source of hope to those of us who still cherish integrity. He is one of the few Nigerians that made my heroes page on my Facebook. He quit his post as Number 2 man to the “Evil Genius” Ibrahim Babangida because he would not take nonsense. How could he allow himself to be railroaded into this ignominy? Same goes with Reverend Mathew Kukah. What happened to him?

This National Peace Committee embodies shamelessness as a result of this singular act. That they could plead for corrupt officials suggests they are corrupt too. This body is a disgrace to this country to even contemplate such a topic with President Buhari. What this Committee did is tantamount to treachery against this country. They are traitors to the people of Nigeria. They are public enemies of the people. The members of this Committee are part of the major contributors to the moral paralysis afflicting our country.

One of the greatest orators in History, Marcus Tullius Cicero (106 -43 BC) explains the threats of traitors as follows:

“A nation can survive its fools, and even the ambitious. But it cannot survive treason from within. An enemy at the gates is less formidable, for he is known and carries his banner openly. But the traitor moves amongst those within the gates freely, his sly whispers rustling all through the alleys, heard in the very halls of Government itself. For the traitor not appears a traitor; he speaks in accents familiar to his victims, and he wears their face and their arguments, he appeals to the baseness that lies deep in the hearts of all men, he rots the soul of a nation, he works secretly and unknown in the night to undermine the pillars of the city, he infects the body politic so that it can no longer resist. A murderer is less to fear. The traitor is the plague.”

By their fruits we shall know them. By their acts we shall identify them. And by their deeds we shall point them out. The National Peace Committee is better called the National Corruption Committee. As pointed out by Cicero, because these personalities speak in accents familiar to us, they constitute a serious and present danger to the survival of this country. It is a sad day when elders and leaders become champions of iniquity.

However, one has to give kudos to President Buhari for staring them down. He deserves the praise of all genuine Nigerians who believe in this war against corruption. President Buhari must be commended for making it clear that he would deliver to Nigerians on this issue of corruption. He should be commended for standing his ground and not giving in to these confused members of the so called National Peace Committee who do not know what their roles should be in the efforts to salvage Nigeria.

But I still believe that President Buhari should follow the evidence wherever it leads. He should not limit his probe to President Jonathan’s administration alone. He needs to veer it back a little more to cover other tenures. He should not also limit his probe to the national level alone. There are a lot of born again thieves among many of the governors that have ruled and are still ruling their states. If some of the most notorious thieves at the state level escape this war on corruption, all the efforts put into this exercise would come to nought because it would leave the possibility for corruption to have the last laugh.

This is the more reason why President Buhari must watch his relationship with Chief Olusegun Obasanjo. Obasanjo has no moral right to ask President Buhari to jail President Jonathan. He is as guilty in this acts of corruption as many others. He keeps running around the country as if he is innocent. He is not innocent and he should be thanking his stars that President Buhari’s probe is not covering his tenure, an act which I still considered a great injustice.


“In the long history of the world, only a few generations have been granted the role of defending freedom in its hour of maximum danger. I do not shrink from this responsibility – I welcome it.”