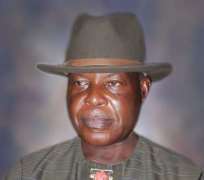 One of Nigeria’s anti-corruption agencies has revealed that former Inspector General of Police Mike Mbama Okiro, who is the current chairman of the Police Service Commission, disbursed millions of naira of public funds in fraudulent payment of air fare for Abuja-based staff of the commission who attended training in Abuja, Nigeria’s capital.

In a report that covered Mr. Okiro’s profligate waste of public funds, the Independent Corrupt Practices and other Related Offences Commission (ICPC) revealed that the current PSC chairman paid N11,750,000 to staff of the police commission to cover their supposed air flight tickets and airport taxi fares to attend training that took place in the Federal Capital Territory.

The ICPC chairman, Mr. Ekpe Nta, exposed Mr. Okiro’s irregular and fraudulent payments in a report that examined corruption, abuse of office and fraudulent act through which the former IG swindled the Police Service Commission. ICPC investigators found that Mr. Okiro misspent more than N275 million of the commission’s funds.

Yet, in a curious twist, Mr. Nta’s report, dated August 6, 2015, did not call for criminal prosecution of Mr. Okiro. He however ordered the officers who received the payment to refund the money to the government.

Below is an excerpt from Mr. Nta’s statement:

OFFICE OF THE CHAIRMAN, INDEPENDENT CORRUPT PRACTICES AND OTHER RELATED OFFENCES COMMISSION

The above captioned petition forwarded from your office on the 25th May, 2015,

2. The Commission has conducted thorough investigation into the matters raised in the referred petition and found:

(i)
That the Police Service Commission (PSC) received the sum of Three hundred and fifty million naira (N350 m) from the Federal Government to monitor the conduct of police personnel at the recently conducted general elections. The Commission budgeted to expend the fund on training and physical monitoring during the election.

Investigation findings revealed that the Commission budgeted for training of 900 staff and to conduct [the] training in Abuja, Lagos and Kano. However, the entire staff force was not more than 391 and that is the figure actually trained in a program held in Abuja only. The Commission accepted the explanation that due process could not be adhered to strictly because of time constraint.

(iii) The Police Service Commission paid DTA to all staff including those based in Abuja that participated in the training program held within Abuja. Air ticket and DTA were paid to management staff and others who monitored elections within Abuja and its environs, even at locations where airports do not exist such as Lokoja and Minna (schedule of affected officers attached).

(iv) It was also confirmed that the chairman collected 5 days each for two conferences that ran simultaneously in Dublin [Ireland] and Orlando, Florida. However, it was discovered that he expended the entire 10 days on the trip. Though he only expended the ticket fare for Abuja-Dublin-Abuja, he has, however, written to the Presidency to expend the ticket fare for Abuja-Orlando-Abuja on another trip coming up by October, 2015.

3. The investigation has not revealed any act of criminal infraction against the person of Sir (Dr.) Mike Mbama Okiro, the chairman of the Police Service Commission, as all issues outlined above are administrative in nature and within the ambits of career public servants’ handling. Consequently, this Commission hereby direct as follows:

(b) That the staff of your Commission who took part in the 2015 general election monitoring exercise and were paid 2-way return tickets and airport taxi to locations within FCT and states of close proximity to Abuja amounting to N11,750,000 (list attached) should refund same to the Treasury through the ICPC Recovery Account No. 1012929790 at Zenith Bank Plc.