Amaechi: Wike Has Been Put To Shame —Rivers APC 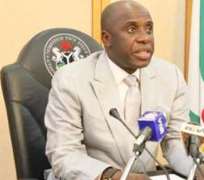 “By turning out in large numbers to honour Ex-Governor Amaechi and through their touching testimonies at that grand reception put together by Amaechi’s Committee of Friends, Nigerians have spoken with one loud voice, shaming Chief Nyesom Wike, who has devoted the past two months of his illegal occupation of the Government House in Port Harcourt to wage an unnecessary war against the man who made him politically in a desperate bid to tarnish his reputation,” the Rivers State Chapter of APC said in a statement signed by the Chairman, Dr. Davies Ibiamu Ikanya.

The party condemned Wike’s witch-hunting of Amaechi, noting that it is a classical case of one biting the finger that once fed him. “We are, however, not perturbed by Wike’s antics because, as we have pointed out time without number, the Caretaker Governor is hounding an innocent man and his efforts to rubbish and pull down Amaechi, who is his political mentor, will turn out to be futile,” Rivers APC said.

It drew Wike’s attention to the testimonies of important political leaders at the reception for Amaechi, all of whom acknowledged the former Rivers State Governor to be an incorruptible Nigerian patriot. “We are grateful to Nigerians for taking their stand on the side of the truth on the Amaechi issue. Our special thanks go to President Muhammadu Buhari for his continued confidence in Amaechi, as well as to Vice President Prof Yemi Osinbajo, Governor Nasir El-Rufai of Kaduna State, his Plateau State counterpart, Rt. Hon. Barr. Simon Bako Lalong, President Buhari’s wife, Aisha Buhari, and the All Progressives Congress (APC) National Chairman, Chief John Odigie-Oyegun, for publicly identifying with Amaechi and testifying to his unimpeachable character,” Rivers APC said.

It advised Wike to bury his head in shame as the overwhelming positive declarations in Amaechi’s favour means that his plot to pull down his predecessor has hit the rocks as earlier predicted by the party.