Would you wash your spouse’s underwear? 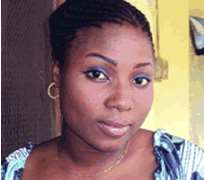 It was the last Saturday in June, a day earmarked for Sanitation throughout the country. Everyone is expected to participate and there should be no movement until 10 am.

But to beat this, mama chose to be on the road on Friday and arrived at her son's house very late. She had not seen him in a while.
In the early hours of Saturday when mama was still in bed, her son and his wife 'Yinka started doing their chores. 'Bosun, mama's son was doing the laundry , while 'Yinka was in the kitchen to prepare breakfast.

Mama got up from bed, stretched herself and shouted “Bosun” , but he could not hear her calling, because he was in the big compound of their five bed-room bungalow. She dashed towards the kitchen, saw her daughter-in-law making breakfast. 'Yinka greeted mama and told her where her husband, 'Bosun was. Mama was shocked when she saw her son hanging his wife's pants on the wire to dry . Mama wiped her eyes in disbelief.

Mama shouted, 'Bosun, what is that you are holding, are you playing with it or you are trying to throw it away?
'Bosun replied it's 'Yinka's; she is busy in the kitchen, so I decided to assist her with the laundry while she prepares the food for the family.

“What is your wife doing that you have to wash her underwear”, she asked adding no wonder, she has taken control over you . She is there in the kitchen singing and dancing and spending a decade just frying some eggs and making tea for just three people, abi, and you are here busy cleaning her underwear.
It generated a controversy and mama got so tensed up and could not stay as long as she planned .She managed to stay with them for the day and she left unhappily the next day.Would you wash your spouse's under-wear?

MR JOSEPH
I can help her wash, if she is too busy or not very strong to do strenuous jobs or if she is pregnant.

Mrs Ifeoluwa Obadare
Of course, yes. If we are married and we cannot share things in common, it makes no meaning. That is why understanding is a mutual thing between couples. I can wash his undies, as long as we can tolerate each other.

Abosede Joseph
It is not whether or not I can wash them. No. It is the fact that I wash them. That is how to know a wife who loves her husband who does not care about anything.
As long as I wash my own , I can wash his as well.

FOLASADE OLAFENWA
Yes of course, I'm proud to wash them, because I'm proud to have him as my husband. After all, as a wife you must wash your baby's underwear, so what is the difference and the big deal?

MIKE
No.I can only assist her to wash her clothes, when she is heavy with pregnancy or if she is a bit strong in terms of health.
Washing her underwear does not reduce my dignity but I cannot just do it.
If she wants me to assist her with the laundry, it would be her clothes and vests not pants. If she cannot wash that herself, I think it is better she does not buy one. Do not buy what you cannot maintain or keep.

KENNY
Yes, I wash his clothes and keep his wardrobe clean. We assist each other both in washing clothes and preparing the food.

GABRIEL K.
I can wash her underwear only when she is not having her monthly period. She should be able to make herself clean at this time. Thank God she is not a little baby anymore. Even the word of God tells us in the Old Testament that at the period she is doing her menstruation, she should be far from the temple because they are seen as unclean until this period is over.

JOSEPH LEKAN
I can wash her clothes. I mean her blouses, wrappers, and skirts but I cannot wash her underwear. No. It is not a taboo, but I jut cannot wash it, it is not for any personal reason but that is just my life.

Gold ONUNYERE
As long as I wash his clothes, I should be able to wash his underwear.
After all it is just dirt on it, nothing more.

MR ANJORIN OLANIYI
Actually people dispute it, because it does not occur so often for both parties, but to me, it depends. I only can do it on condition that she is healthy. She won't open her eyes and watch me wash her clothes, and if I do it is my family affair. The washing won't be carried out in the market square. It is in my house because my wife is also my mother. So if the cap fits, wear it.

TOSIN YUSUF
If I really love her from the depth of my heart, I will wash her underwear and even do whatever she wants, but if she is not the type of woman that gives me joy I won't do anything for her.

MRS JONNES
It is what keeps the family going. Where there is love, no wife would feel too important and full of herself and refuse to wash her husband's clothing. Even without anyone telling us to do it, it is our major responsibility as wives and mothers in the home.

TOYIN ADEWALE
There is nothing wrong with that. It is my duty to do that as his wife. If I don't do so, it means I'm not submissiveness and that means I'm arrogant.
God actually sees both of you as one, so if I can wash my own underwear , it means I can wash his also.
God has made him the head. Moreover, he is a man, he has so many commitments, provides for the family and as the wife, I must make sure I keep him clean as much as possible.

MRS ALIEMEKE
Of course yes, I will. We became one the day we got married, so if I can wash mine, I can as well wash his. Anything I can do for myself as his wife, I also can do for him as my husband. I have every right to take proper care of what he wears, so his underwear shouldn't be excluded.