I'M NOT AWARE OF ATIKU'S RETURN TO PDP 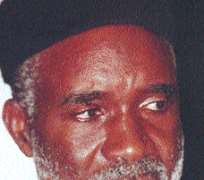 He also said he had no plans to organize a grand reception in his honour.

In a statement issued at the weekend, the Principal Special Assistant (Media) to the governor, Mallam Aminu Iyawa, described the reports in the media as mischievous statements as there was no issue of reconciliation between Nyako and Atiku.

'We wish to categorically deny that the Adamawa State governor, Admiral Murtala Nyako, is contemplating any such thing. We also wish to refute the claim that the two had a meeting of reconciliation, let alone fixing a date for a supposed reception.

'We want to make it abundantly clear that no such meeting took place and, therefore, urge Nigerians to disregard this self-serving statement that only exposed the desperation of Atiku's associates and aides, in trying to find a credible platform for their political godfather to realize his ambition of becoming the next Aso Rock tenant,' the statement added.

According to Iyawa, while the former Vice President is at liberty to join whichever party he wishes, including PDP, he must follow due process by registering at his ward when the register is open to prospective party members.

He further disclosed that the state secretariat of PDP was not oblivious of claims in some quarters about the Turaki Adamwa's registration.