Obama Strings Of Achievements Without Accolade 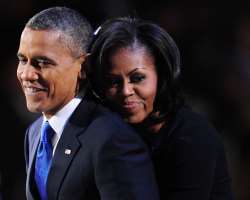 What does African oil producing countries; especially Nigeria, Ghana and Equatorial Guinea have in common with American Republicans against our son Barrack Obama? They may not join the rest of the world in the celebration of Iran Nuclear Agreement that has sent world market oil price down. Iran can produce 3.1 million barrels of crude oil daily. Hard hit by oil market glut, Buhari will pitch sales and help against crude oil theft on high seas, in the meeting with Obama.

Those that were opposed to Obama Peace Nobel Price may now agree that it has inspired him as it was meant to. Can Obama success inspire Buhari to deliver us from greed for Africa’s sake?

The new Iran nuclear deal is the latest in Obama’s strings of achievements. It is very much like President Richard Nixon’s China Agreement and Ronald Reagan’s Soviet Agreement. They were all very controversial because they involved negotiating with enemies that threatened the very world dominance of United States. Just as arch conservatives were against Nixon and Reagan then, they have already piled up to derail President Obama Nuclear Agreement with Iran.

Compare two black men in two different environments. Obama accomplished United States oil self-sufficiency; can do without oil import. Nigerians cannot eat oil, so Obama will urge Buhari to stop the aggressive destruction of portable refineries in Nigeria. But improve its use for oil and coal as energy to spur Nigeria’s industrial and economic growth: the same way United States and Russia have. After all Japan, China and South Korea stock pile our oil for that purpose.

The difference between Buhari and Obama is their systems. Obama is not a Republican, Nixon and Reagan were. While some conservatives always try to undermine Obama, this first African American President will go down in history as one of the most accomplished United States leaders in a generation. It may be too early to compare him with other Presidents but the fact that he has exceeded expectation of critics as an African, is not lost on most fair Americans.

There are discussion in the black community that Obama has delivered to women, Latino, gay and many middle income Americans that could not afford healthcare that were available to the very poor and the rich. But the black communities are still waiting for Obama while his term is getting close to the end. Some of blacks ignore his accomplishments in the correctional system.

Most of the promises he made to special interest groups have been delivered except to African Americans that expected more than he has done because those successes are not as obvious and still transient. Until unemployment rate among African Americans go down considerably, there will still be dissatisfaction among some blacks similar to those of arch conservatives.

Nevertheless, Obama the first President to visit a prison has worked very hard in the area of criminal justice system that has been unfair and weighed down African Americans. Their incarceration rate is proportionally higher than their population. Others will equally argue that African American communities have higher crime rate. The most devastating effect has been the drug war and “three strikes” which claimed more African American men into prison.

"The problem is the way it was written and implemented is we cast too wide a net and we had too many people in prison, " President Clinton said. "And we wound up...putting so many people in prison that there wasn't enough money left to educate them, train them for new jobs and increase the chances when they came out so they could live productive lives." See here

Obama has worked hard to remove some of the unfair biases in sentencing and appointed more black and white judges that are not necessarily liberal on crime but fair in their approach to minorities in the judicial system. The story about President Jimmy Carter as President was refusing to fill certain vacant positions until he got more qualified minority judges. Nobody could make the case that in the United States; they could not get qualified minorities as judges.

Justice Thurgood Marshall had warned that it was not a matter of black or white judges but that of fair people. There are conservative minority judges just as conservative judges as borne out by the Supreme Court members. So African Americans have to be careful what they pray for, they may get more than they bargain for. Fortunately, it is not always about race but an important factor in a country that still recoil from open discussion on race.

Nevertheless, Obama’s rating is higher among African Americans and Africans than any other groups. Most of the Democrats still have high opinion about him but the so called independents that usually swing the elections are held back by the negativities coming from conservative parties and their press. For a President that has accomplished so much, one would think his rating would be much higher that what it is at home. He is more popular in foreign countries.

Obama promised direct meeting with Iran and Cuba during his campaign for which he was heavily criticized for being naïve. The President of United States does not talk to enemies without getting them to capitulate and renounce their oppressive government in exchange for western democracy. He has followed Reagan and Nixon that you can get an agreement with your opponents to achieve a greater goal of economic and peaceful world.

Negotiations within groups and between countries are not static, they are ongoing and must be renewed by one leader after the next to buy time and peace. The amount of money that will be spent making wars can be better spent making peace and providing for better living conditions among the poor in different communities of the world. Africans need their own Obama, no matter which country he or she comes from.