US WANTS ADEFUYE OUT OF BUHARI’S VISIT 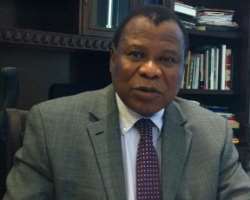 The visit is however coming against the backdrop of frosty relations between the authorities in the U.S. and Nigeria’s Ambassador Mr. Ade Adefuye.

In a speech in November last year, while receiving a delegation of the U.S. Council on Foreign Relations, the Nigerian Ambassador to the United States Adefuye said both the Nigerian people and the government felt abandoned by America.

“I am sad to inform you that the Nigerian leadership: military and political, and even the general populace, are not satisfied with the scope, nature and content of the United States’ support for us in our struggle against terrorists,” he had said.

“We find it difficult to understand how and why in spite of the U.S. presence in Nigeria with their sophisticated military technology, Boko Haram should be expanding and becoming more deadly”.

About two weeks ago Nigeria recalled about 27 non-career ambassadors and ambassadors extraordinary and plenipotentiary on tour of duty abroad.

They were given August 6 deadline to wind up their activities and return to the country.

There are also about 60 career officers who have completed their tour of duty and are expected to return to the country soon.

A source familiar with what led to the recall of the ambassadors told Daily Trust that it was triggered by the United States’ discomfort with Ambassador Adefuye’s recent “undiplomatic conduct.”

The source said Adefuye adopted a belligerent tone in Nigeria’s bilateral relations with the US in the twilight of the Jonathan administration especially in relation to the Boko Haram insurgency.

The source said that the Americans were not comfortable with him being involved in President Muhammadu Buhari’s next week’s visit to Washington.

Daily Trust learnt that another Nigerian diplomat and deputy representative at the United Nations mission in New York is expected to lead the diplomatic representation during the visit.

It was learnt that this is going to be so because Buhari’s visit is coming when there is no cabinet level representation from the ministry of Foreign Affairs.

Contacted on the matter, Spokesman, Ministry of Foreign Affairs, Ode Ogbole said “I don’t know anything about that. We can’t react to what we don’t know. I will find out tomorrow.”

During next week’s visit, Nigeria and the U.S. will discuss measures to strengthen and intensify bilateral and international cooperation against terrorism in Nigeria and West-Africa.

The Special Adviser to the President on Media and Publicity Mr Femi Adesina said in a statement yesterday that Buhari would hold high-level talks with Obama and other senior officials of the US government.

He said Buhari will meet Obama at the White House on July 20, and later hold further discussions with the Chairman of the US Joint Chiefs of Staff, General Martin Dempsey and the Deputy Secretary of Defence Robert Work on military and defence cooperation.

On America’s support for Buhari’s government’s war against corruption as well as fresh measures to boost Nigeria-US trade relations, the president would meet with US Vice President Joe Biden and confer with the US Attorney-General Loretta Lynch; the US Secretary of Treasury Jack Lew; the US Secretary of Commerce, Penny Pritzker and the US Trade representative, Michael Froman.

Adesina said Buhari would be received by the US Secretary of State at the State Department in Washington DC and would later meet with the US Senate and Congressional Committees on Foreign Relations as well as the Black Caucus of the US House of Representatives.

The presidential spokesman said before leaving Washington DC, Buhari would address the United States Chamber of Commerce and Corporate Council for Africa.

He said the trip would also afford Buhari the opportunity of a reunion with members of the American War College Class of 1980 in which he was a distinguished participant.

Buhari will also host an interactive session with Nigerians in the American Diaspora.

The President will be accompanied by the governors of Imo, Nasarawa, Edo, Borno and Oyo States as well as the Governor of the Central Bank of Nigeria and Permanent Secretaries of the Federal Ministries of Defence, Foreign Affairs, Industry, Trade and Investment.

President Buhari is due back in Abuja on Thursday, July 23.