IF I WERE RICH, I WOULD INVEST MY MONEY ON SCHOLARSHIPS FOR CHILDREN OF THE POOR â€“MAGGIE IBRU 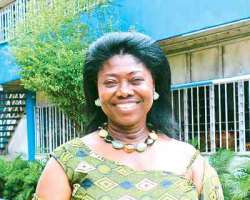 Dr. (Mrs.) Maggie Ibru
Mrs. Maggie Ibru is clearly a woman of many parts. A trained pharmacist, she is the proprietor of S.T & T Regency Schools, owns a thriving furniture manufacturing business, and runs a Non Governmental Organisation that caters to the needy. She speaks with ADA ONYEMA about her businesses and her marriage to Chief Alex Ibru, former minister of Information and publisher of the Guardian newspaper.

How S.T&T Regency Schools were born.
I asked God for a long time to show me what I would be doing. At that time, my furniture business was flourishing but I craved to do more things. I asked God to give me a business that will serve Him and humanity. Somehow, a lady advised me to set a school that was when my daughter was in school. From that moment, I started with a small play group because I didn't have enough money to set up a big school.

God made a way for us and we bought plots of land in the Ikeja Government Reservation Area, where we built S.T &T Regency Schools. People were surprised. The dream that God gave us was to set up a secondary school, not a primary school. God knew where we were going, but He took us through nursery and primary school so that we can know the children's mindset. Then He brought us to where He wanted us to go, which is the secondary school. The battle to establish the school in the GRA was not easy, but God fought it for us. I believe that the process of forming a school is an errand. But I am not going to stay here forever because I am already seeing my end here.

In a few years' time, I will go into medical services. I don't know if I will love to handle old people's homes. I will love to do it if I could so that I will be able to give them heaven on earth. It is good for one to do for other people what God is doing for you.

S. T. & T Regency College is a co-educational day/boarding private institution located in GRA, Ikeja. The vision of service which resulted to the birth of the S. T. & T Regency was born in 1995. The name of the school was initially formed from my children; S-Simi, T-Timi and T-Teeggee. But in line with God's mission for the school, S.T. & T has now been redefined to be S-Stand for the truth, T-Trust God within His standards, and T-Teach the truth. This is why our motto became, Discipline, Confidence, and Integrity which represents our interpretation of God's desire for His children.

Life as a mother, Proprietor and NGO Director.
God has given me the strength to overcome challenges. I have three children-two females and a male, plus my friend's three children who died recently. I am a basic woman. I am a rugged field and research person. God gave me the wisdom to overcome challenges. Life is a leveller that is why I said my NGO is on your mark, set, and then every child on that line can take off. That is what the NGO is about. It gives one a starting point to every child so that they can run the race like everybody does. If I hadn't gone through all these things, I wouldn't have known how to do all that I have accomplished. As a Catholic member, I used to follow the Legion of Mary to the old people's homes where we assist them in cooking and washing their clothes. These are all levelling grounds.

These children include my biological children, the children in my school and in the whole world. In any place I have been, people know me. There is no trick that children may want to play that I do not know. I always feel that God has prepared me for this role. Otherwise, it wouldn't have taken me through all the things I have experienced. Also counsel women. I normally relate with the children, advise them on different issues and punish when they misbehave. Discipline is about giving boundaries and talking to the children and I always allow the children to talk to me. That is why they dialogue freely with me.

NGO.
Issyma Children Foundation is a Non-governmental Organisation, NGO that has trained a lot of men to become furniture designers. We take men from motor-parks and train them as upholsters. All the furniture in our school were made by them though, I normally pay them for the works they did for us.

I taught them the job because I have a furniture factory and I still have some of them working with me. So many of them have become great, before the Lord led me to establish a school and in the school, we have always been giving scholarship. We have about 17 students on full scholarship at present and in another school, we have awarded more than 20 students scholarships. We have students in the universities and we also have homes that we pay money for hostels.

Issyma Children Foundation looks after children. Although we don't beg for money, but work for our money. Like the school for instance, when I was practising pharmacy, I used to put the money into the NGO. Though we took a loan from the bank to set a school, the NGO bought the land in which the school was built. So the school is like a tenant to the NGO and the school will continue to give scholarship to children, even it is 10 Per cent the population of the school.

Marriage to Chief Alex Ibru.
His voice attracted me. There was a voice and a character behind the voice. That was the first attraction and that was how our journey started.

I didn't know that my husband was rich. When I met him I just liked him. Somehow at the back of my mind, I didn't want to marry a poor man and I walked into it somehow. My husband is a wonderful man. I learnt how to look after children in my matrimonial home and I loved all my husband's children. It is wonderful! I love my step children. If you love a man, you should also love his children. The fact that we are not that much together does not stop me from loving him.

In a nutshell, it is also a forum where we sensitise one another and this is the eighth edition of the forum. Indecent dressing, pornography and other vices are taking different dimension so we need to pray for discipline, confidence, and integrity of our children. God loves women because He placed good values in our hands so that we may inculcate them in our children. We have decided to pray by 12 Noon every Wednesday not only for the children of the school, but the children in whole world and the topic for the next forum will be on 'Relationship and marriage'.

Background.
I am from Okpanam in Delta State. My mother was Efik ,but I am more French than the French themselves. I obtained a doctorate degree in pharmacy in Paris. I learnt carpentry work on the job.

Advice.
If I had money, I will spend it on scholarship and to finance church buildings. One's building is not an achievement. Achievement should be who one has educated, the number of people that have seen the light because of you, and the number of families that you have fed.

There is poverty in many homes. Life is not about the money that you give to a family; it is about taking a child from there and funding his or her education so that he would champion the cause of that family and their life would not remain the same. When my mother left their village, she brought a lot of people out to see limelight and that is an achievement. People make mistakes when they feel they have arrived. Which bus stop did they arrive?

One tree does not make a forest; we have to let the grass grow. Let's not allow leaves to cover the grass so that the grass will not lack water. Let us allow the water that falls on our leaves to wet the ground so that the grass that see the light of the day can rise and the land would be green and people can sit on them and have a barbeque. That is what the foundation is all about.