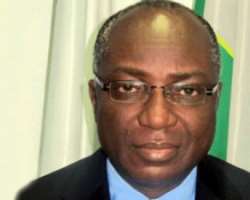 Mani, in a memo countermanding the ADC's order, said the DSS operatives should disregard the directive by Abubakar. He said the order was a misrepresentation of Buhari's directive.

Buhari's ADC had on Wednesday last week issued a memo redeploying the DSS officials from 10 beats that they had hitherto manned inside the Presidential villa, explaining that the decision to strip the DSS officials of their traditional roles was part of efforts to enhance general security within the villa.

He also claimed that the development was necessitated by 'recent events,' which he did not disclose.

The ADC consequently directed personnel of the Armed Forces and the Nigeria Police to take over the DSS officials' duties of providing 'close/immediate protection' for the President with immediate effect.

But in a June 26, 2015, memo by the CSO, a copy of which was obtained by our correspondent on Sunday, Mani directed the DSS officials to disregard the ADC's order, saying the duties being performed by the DSS personnel in the Presidential villa were backed by relevant statutes and gazetted instruments.

These roles, he added, included close body protection of the President in line with standard operational procedures and international best practices.

He said the law empowered personnel of the DSS to provide protective security for designated principal government functionaries.

The functionaries, he said, included but not limited to the President and Vice President as well as members of their immediate families.

He said the law also mandates the DSS to provide protective security for sensitive installations such as the Presidential Villa and visiting foreign dignitaries.

The CSO said it was for that reason that personnel of the DSS near the President were carefully selected and properly trained and that background checks were constantly carried out on them to confirm their suitability and loyalty.

Mani said the issues raised in the ADC's memo suggested that he ventured into an unfamiliar terrain.

The CSO's memo read, 'In fact, the issues raised in the aforementioned (ADC's) circular tend to suggest that the author may have ventured into a not-too-familiar terrain.

'The extant practice, the world over, is that VIP protection, which is a specialised field, is usually handled by the Secret Service, under whatever nomenclature.

'They usually constitute the inner core security ring around every principal. The Police and the military by training and mandate are often required to provide secondary and tertiary security cordons around venues and routes.

'However, all other security agencies, including the army, the police and others, also have their roles to play. It is on this note that heads of all security agencies currently in the Presidential Villa and their subordinates are enjoined to key into the existing command and control structure. They are to work in harmony with each other in full and strict compliance with the demands of their statutorily prescribed responsibilities.

'Meanwhile, joint training programmes and other incentives will be worked out in the days ahead to ensure that all security personnel at the Presidential Villa are properly educated to understand their statutory roles and responsibilities.

'This is with a view to avoiding obvious grandstanding, overzealousness, limited knowledge or outright display of ignorance in future.'

Mani asked all the unit and departmental heads to bring the content of his memo to the attention of all personnel for compliance.

He copied the National Security Adviser; the Chief of Defence Staff and the Director-General of DSS.

A source however told our correspondent on Sunday that although the CSO's directive had been widely circulated, it has yet to take effect as the military men drafted to replace the DSS officials were still at their beats.

The source however introduced another dimension when he blamed a top DSS official in the Presidential Villa for the confrontation.

He claimed that trouble started when the official ordered that soldiers should be blocked from residence reception.

Infuriated by that action, he said the soldiers contacted the ADC who became angry and vowed to report to the President.

'Before that incident, the soldiers have been cooperative and well-behaved. The situation we find ourselves is painful but it is also avoidable,' the source added.

A security expert, Mike Ejiofor, had told our correspondent in an interview on Friday that the ADC's directive could not stand because it could not be backed by law.

The Presidency had in a statement by the Special Adviser to the President on Media and Publicity, Mr. Femi Adesina, on Wednesday, said Buhari had not given any order for the expulsion of the DSS officials from the Presidential Villa.

Adesina however admitted that a reorganisation of security at the seat of power was underway. Punch