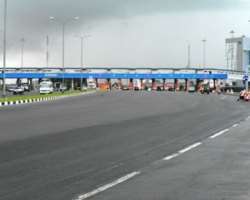 The Governor of Lagos State, Akinwunmi Ambode, has assured residents that tolls will not be collected at the second toll point on the Lekki- Epe Expressway.

Ambode made the remark at an interactive session with journalists at the Banquet Hall of the Lagos House, Ikeja, a statement said on Sunday.

The governor, in the statement by his Chief Press Secretary, Habib Aruna, said his concern was ensuring the completion of the road.

'We must start thinking of the future concerning that road. We said we will have an International Airport in Epe, and an Export Processing Zone in Lekki and a Deep Seaport also in Lekki.

'Should we not start thinking about how we will improve and create a 10-lane road between Ikorodu, Itoikin, Epe and Ijebu Ode so that people can go out from there? There is no point constructing the road, paying tolls and in five years' time, the road is gone,” the governor stated.

Ambode said once the Lagos-Badagry Expressway, which was being expanded into 10-lane, was completed, the community would be opened up for business activities.

He added that his administration would make careful efforts to grow the tourism potential of the state.

He said, 'As more means of transportation come on board, the more than 600,000 private car owners and 120,000 motorcycles that are being put on the road in the state on a daily basis will reduce in number.'

He said his administration had decided to scale up governance by rearranging the civil service through the realignment of some ministries and agencies, while creating a new Ministry of Wealth Creation and Employment.

Ambode said, 'We have said this is a government of continuity, but it is continuity with improvement. It is about making life easier for the people. We are receptive to new ideas and that is why we are going to be creative, innovative and thinking out of the box.'