Whether Saraki goes to Obasanjo's Ota or Ouagadougou 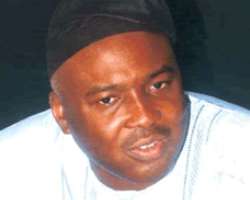 Two things that I know very well: not all smart people play chess, but no dumb person plays chess.

In the last one week, Nigerians in their usual manner has made so much noise, and this time the noise is bout how much Nigerian Legislators earn, while for me, it is not so much about what they earn. For me, it is what they do…

A few years ago I questioned the Senate Leadership under David Mark, a fine gentleman and officer, full of his own share of misdemeanor, whether it being that he is a Belize citizen or he has told us that table phones are for only the rich, or he is going to some foreign land to have his tooth removed.

David Mark, is he the same that became an overnight democrat during Abacha's time, the same Mark that was rumored to own a golf course either in Switzerland, Ireland, Idomaland, one of those lands.

One landmark achievement of his Senate leadership was passing almost half a century bills in some 10 minutes.

Now we have a Bukola Saraki, is he a symbol of Nigeria's budding legislative process, or a man that will come and play to the gallery or remain a case of political expediency? He has dissatisfied party dictates, executed successfully a coup against Jagaban Tinubu , but will he tow Nigerian dictates?

Is he not Saraki of the Zimbabwe farmers' fame that nothing became of it, same dude that people perishing at his annual rice sharing festival?

Is Oloye's son...up to the task of heading Nigeria's hallowed chambers at this trying times of the Nation? Can Saraki disappoint party at the expense of the Nation, can we point to the positives of Saraki's career in the last 15 years...Is Saraki's leadership of the Senate not founded on the falsehood of APC's failed zoning arrangement or some political miscalcus of godfathers...Okay, is this foundation not a sea sand, subject to crumble?

Have we forgotten that Banana peel which Wabara played with at his own expense, same Banana if time had allowed would have consumed Nnamani, it fell Okadigbo, also Evan or Evans. David Mark lasted, will Saraki last, David Mark was the party loyalist, the systems man? Is Saraki same?

Saraki is not as unintelligent as many want to portray him. He is not unaware of his environment. If many have forgotten he once like his father vied for Presidency of this land, he is not short of sagacity needed to navigate the mud of Nigeria's bolekaja politics.

He's emergence as Senate President is with the PDP blessing, one, which many may allude, still has Saraki's soul. He has been said to have Atiku's blessing. He has visited the Ota ebora.

I am sure he is aware that Obasanjo's blessings come with a price. Already some members of the Senate have alerted the public of a plan to rubbish the Senate President...Can an upright man be rubbished without his consent. Heading the Senate is not a task that should be taken lightly. Nigerians believe that the Present Senate has a role to play in stabilizing a polity that is going down the drain. But with the emergence of a Saraki, a lot of people are shaking their heads in concern. Is it possible that Judas won’t betray Jesus given a different scenario; can Saraki be trusted not to disappoint?

This is the eight National Assembly under this dispensation, is there hope that there would be a "SAK" difference, would Saraki and his buddies for once act as agents of progressive change, lift words from paper and translate into action? If Nigeria is to move ahead, and make progress even on a morally faulty foundation, can Saraki and the new kids on the block tighten their seat belts and drive Nigerians following the rules of the constitution, legislating with the common-man as their watch word? With almost a dozen ex-Governors that possess questionable characters, men and women with tainted glasses for images in the National Assembly, will this House under Saraki herald a new improved National Assembly with a virile leadership?

The task before Saraki is ernomous, like Buhari, his emergence again begs for answers as regard the psyche of the Nigerian Polity. Is it possible that this body would work towards the deepening and strengthening of the polity or again here comes another corrupt era? Since 1999 Nigerians cannot really point to a six months period in which we as citizens smiled or had no scandal or thievery to cry to, even our soccer, which hitherto was a source of joy, brought only tears, sorrow and anguish.

The National Assembly was a lame duck, the only conquest till date being the "third term".

Nigerians have continually had their high hopes dashed...the National Assembly with all the notice it had. First again will embark on a three and two weeks recess respectively for lack of accommodation, the need to sought out logistic problems and again billions are being allotted to them even before they begin the task ahead...Is there hope? As much as I agree that part of Nigeria's problem is Nigeria and Nigerians, the led and leaders, our impatience, the armchair critic...

I say with avoidance of doubt and with strong conviction that the present era, Executive, Legislative and Judiciary are again at the threshold of history. For Saraki and his National Assembly, it would be marginal success or monumental failure...

Two things that I know very well: not all smart people play chess, but no dumb person plays chess. The yam is yours, farm is yours, you have fertilizer, and best of farm implements...the reason why you would fail is because you all never wanted to succeed, so prove us wrong and please succeed.

So, whether at, Obasanjo’s Ota or Ouagadougou, no dumb person sits in the Senate but not all the smart ones are part of the process. Would Saraki succeed--Only time will tell.