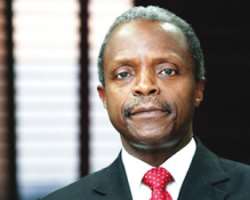 The vice-president, who delivered  the 10th  anniversary lecture of Crescent University, Abeokuta, tagged, 'The Nigerian Economy and the Future', yesterday hinted that some tough decisions would have to be taken to put the country back on the path of genuine growth and development  in line with the All Progressives Party (APC) programmes.

He said that despite several billions dollar-investment in power generation and distribution over the years by government, businesses and Nigerians still suffer greatly on account of  electricity.Osinbajo also disclosed that large-scale corrupt practices and dubious awards of contract in Nigeria's power sector by past administrations were  responsible for inadequate and epileptic power supply in the country.

He said there should be total overhaul in the sector in terms of generation and distribution if all efforts on power production must be achieved.

According to him,   records showed that series of contracts were awarded in the power sector for several years and are still ongoing without tangible improvement.

'Though Nigeria needs more than 10,000MW to stabilise economic growth, the present capacity of power transmission lines cannot distribute more than 5,000 MW since the improvement works on transmission lines have been stagnant over years and should be improved upon if Nigeria must achieve tangible output from the sector.

'Unfaithful to awards of contract and execution of contracts being awarded are the major challenges. Several contracts in that regards have been awarded several years back, but have not been completed.

'What is being produced now is less than 3,000 MW. Our transmission grid today can only transmit 5,000 MW and we need to improve on transmission capacity to transmit enough power needed to stabilise economy. That is why the private investors have to increase capital investment in power sector.

'Insurgency and instability of government is a major setback especially in the agricultural sector. Agriculture contributes 24% to Nigeria GDP but the 24% is under threat because of the insurgency in the North East,” the VP said.