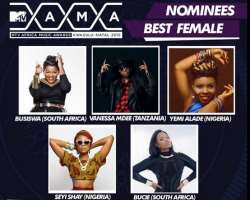 VIMN Africa and MTV Base tonight revealed the nominations for the MTV Africa Music Awards at a star-studded reception at Harem, Johannesburg, South Africa attended by MAMA 2015 nominees Seyi Shay, Black Motion, Bucie, Cassper Nyovest and Diamond Platnumz and a host of artistes, celebrities and media.

Celebrating the extraordinary evolution of African achievement, this year's MAMA recognises contemporary artistes and trailblazers in a range of music and lifestyle categories including Song of the Year, Video of the Year, Best Collaboration and Personality of the Year.

Speaking at the event, Alex Okosi, Senior Vice President & Managing Director, VIMN Africa,commented, “As Viacom International Media Networks celebrates its first 10 years in Africa, we are thrilled to pay tribute to the dynamism, creativity and passion of all the MAMA 2015 nominees. Applauding music and achievement all over the continent, the MAMA recognises the contribution of both enduring icons on the African music scene, and new and emerging talents of the future.”

The enduring popularity of Hip Hop on the continent is captured in the hotly contested Best Hip Hop category, where Cassper Nyovest (South Africa) is battling it out with K.O. (South Africa),Olamide (Nigeria), Phyno (Nigeria) and Youssoupha (DRC).

Desmond Golding, Head of Department of Economic Development, Tourism, and Environmental Affairs, KwaZulu-Natal Province, commented, "These nominations mark a significant milestone to the MAMA, which KwaZulu-Natal sees as the linchpin to deepening tourism, investment and talent.”

“Congratulations to all the 2015 MAMA nominees, particularly the nominees of Best New Act Transformed by Absolut," said Sola Oke, Marketing Director, Pernod Ricard Nigeria. “We look forward to transforming the Best New Act nominees' MAMA nomination journey by garnering support for them through our supporter video shout-outs and live in-market performances, and via our “Africa is Absolut” campaign. The campaign celebrates Africa's unique creativity, recognising artists who stand by their style, who are creators, innovators and originators. A campaign that encourages artistes to Be Absolut.”

Phillip Sithole Head of Durban Tourism proudly stated, “The MAMA is a true reflection of the rapid growth and music potential of the African continent. The City is proud that the event will be a catalyst to showcase the talent in the local music industry and create opportunities for our young and aspiring artists to be competitive globally. We wish the nominees in all the categories the best of luck and may they be proud of reaching this achievement for their continent.”

A total of 70 nominees were revealed at the event, across 13 different categories. Nominees for additional categories, including the MTV Base Leadership Award and Best International Act, will be revealed at a later date.

You can start voting for your favourite artistes live now at mama.mtv.com SEYI SHAY AT THE MTV HEADQUARTERS IN SOUTH AFRICA