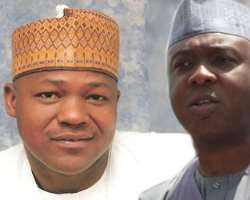 The All Progressives Congress, APC, was at the weekend teetering towards a major crisis following serious disagreements over the emergence of the new leadership of the National Assembly.

The party leadership was, however, last night rallying round to quench the dissent with an appeal for unity, saying the party must not enter tomorrow's leadership contest as a divided party.

That appeal was, however, of little effect in the camp of supporters of Senator Bukola Saraki's aspiration for Senate President and those for Rep. Yakubu Dogara's speakership ambition who were insisting on taking the battle to the floor of the Senate and the House of Representatives.

Supporters of Dogara, it was learnt, had petitioned President Muhammadu Buhari as the party leader to step into the matter.

Meanwhile, despite assertions that it would not be involved in the unfolding script, the opposition Peoples Democratic Party, PDP, was last night also mobilising for a strategic alliance with the Saraki and Dogara tendencies in the APC.

A number of PDP governors, it was learnt, are arriving Abuja today ahead of tomorrow's leadership contests.

The APC has 209 members-elect while the PDP has 140 with smaller parties producing the remaining.

The crisis in the APC was widened at the weekend after some national officers of the party organised a mock election to pick a candidate for Senate President and Speaker.

Rep. Femi Gbajabiamila won the ballot among the members-elect after Dogara pulled out alleging that it was an ambush as he was never informed that the meeting with party elders was to be a mock election.

In his absence, Gbajabiamila, the outgoing Minority Leader of the House, polled 153 votes to the three polled by Dogara. Dogara yesterday rejected the result, saying that in his absence he could not have been nominated for what he called a mockery of democracy orchestrated by a few national officers.

In a statement yesterday, a leading supporter of Dogara's group and outgoing chairman of the House Committee on Information, Rep. Zakari Mohammed, queried the alleged inference of outside interests to project a favoured candidate.

'Having initially consented to having the process halted, following our complaint that we were not put on notice that a primary election was in the offing, we wish to ask who the National Chairman of our party, Chief John Oyegun, was referring to when after about one hour of the stand-off, he declared that he was under pressure to conclude the exercise?' Mohammed asked in a statement issued on behalf of Dogara's supporters, Consolidated Group.

Briefing journalists in Abuja, one of the arrowheads of Dogara's Consolidated Group, Rep Abdulmunin Jibrin, APC, Kano, noted that the stability of the House was paramount and that they would not watch the party impose a Speaker with tainted records and also subservient to an individual.

He said: 'You are aware of the facade called mock election held by our party on Saturday. The whole exercise was a fraud, it shows that the party made a mockery of itself. We condemn the election and it was not in the spirit of the party, we caution the party to tread the part of honour.

'The House must be left alone to choose its Speaker. We will not allow an individual to pocket the House by having a Speaker that will have a special bedroom in the House of an individual. We know that we belong to a party, but when the House takes off, it will now become a House for all Nigerians.

'We have been intimidated and threatened and because of this have decided to formally write a petition to the Commander in Chief, President Muhammadu Buhari, who is the leader of all of us, the leader of the country including the party for him to intervene on the matter and call the party to order.'

Answering questions on why he did a volte face by suddenly campaigning against the candidacy of Gbajabiamila after earlier placing adverts in support of him, Jibrin said the decision was informed by new information at his disposal on Gbajabiamila's past.

'Yes, we explored the possibility of working with Hon. Femi in the past but when I got information about his record, I backed out,' he said citing a case in court on the alleged past of Gbajabiamila.

The assertions of Dogara's Consolidated Group were dismissed last night by the Femi Gbajabiamila Speakership secretariat in a briefing.

The camp debunked the claims of the Dogara group that they walked into an ambush at last Saturday straw poll.

A member-elect, Dickson Tarkighir, who spoke on behalf of the Gbajabiamila's supporters said: 'We wish to thank APC members-elect for the overwhelming votes they gave to Femi Gbajabiamila at yesterday's (Saturday) mock election conducted for the APC members aspiring to be Speaker and Deputy Speaker of the 8th House of Representatives.

'We are humbled by the show of love and support Hon. Femi Gbajabiamila has received so far across party lines.

'In furtherance to the genuine aspiration of Hon. Femi Gbajabiamila, it is appropriate for us to be magnanimous in victory and extend our hand of fellowship to the 16 of our colleagues who purportedly left the venue as a result of their claim of unpreparedness for the mock election.

'We are indeed grateful that some of them voluntarily returned to the hall to be part of the successful election. Just as the party said earlier before the election, no group loyal to any of the aspirants was placed on notice.'

Dismissing the Dogara group as lacking the change credentials or character of the APC, he said: 'Definitely, these are not agents of change. The party gave members-elect the platform to elect a popular candidate that would represent the party in the House and we are glad that in the end of that exercise, it was res ipsa loquitur. Had Dogara won the mock election, we would have all queued behind him now but as a mark of discipline and respect for the party, we are all behind Femi Gbajabiamila.

'We have reached out to our friends in other apolitical parties and we are thankful by their popular response.'

The party said in a statement in Abuja by its National Secretary, Mai Mala Buni said: 'However, we must put the interest of our party above personal interests and avoid a situation whereby any other candidates, apart from those picked by the party, will emerge as Senate President and House Speaker on Tuesday.

'Any outstanding issues will be resolved by the party, so we won't go into Tuesday's election with more than one candidate each for the two posts, Senate President and Speaker, House of Representatives,' adding that it would be a shame if, despite its majority in both chambers of the National Assembly, the APC is unable to produce a Senate President and a House Speaker of its choice.

APC explained that its role in the entire business of ensuring a common front within the party ahead of Tuesday's election is that of an honest broker, saying its goal of ensuring that the party does not go into the election with more than one candidate for each post has now been achieved.

The party appealed to all aggrieved members to sheathe their swords and allow peace to reign, in the overall interest of not just the party but the entire nation.

Both the Saraki and Dogara camps were, however, rebuffing the entreaties from the party last night as they were pushing to go to the floor to determine the leadership contest.

It was gathered that as part of the strategies to consolidate its grip on the block votes of the PDP in the House that the party could be offered a significant position in the House by the Dogara group. Vanguard