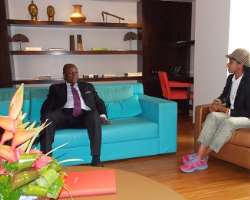 As the worlds youngest film maker according to CNN, CNBC and Bloomberg TV, 12 year old Zuriel Oduwole begins the month of June on an exciting note, meeting and interviewing her 15th world leader - H.E. President Alpha Conde of Guinea.

Her interview with him centered on the reality and challenges of a post Ebola Guinea, [an epidemic Zuriel launched a children's hand sanitizer campaign against and got her featured in ELLE Magazine], the education of youths in Guinea, and how the President sees a new Guinea developing beyond its potentials, now that the Ebola epidemic which started in the country last year and almost brought the world to a fear frenzy is completely eradicated.

Zuriel, who does indeed have the attention of global leaders, continues to show and demonstrate the power and possibilities of Africa's next generation, especially the influence of its young Girls and Women. She indeed epitomizes the inspiration of the continents youths, and is becoming a future global leader to watch, according to Forbes Magazine.

She heads back home to Los Angeles, later today.