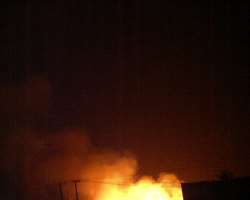 The Director General of National Emergency Management Agency Alhaji Sani Sidi has on Friday distributed drugs to the victims of Thursday's bomb attack that took place near Jimeta Market.

Alhaji Sani Sidi who led a team of Federal Government's delegation involving the Inspector General of Police Solomon Arase called on the people to give security agencies the needed cooperation to stem the tide of attacks on innocent Nigerians.

He appealed to well meaning individuals and corporate bodies to assist the victims with blood as doing so may lead to the rescue of many lives.

The entourage was at Government House where they sympathized with the governor of the state Muhammadu Jibrilla Bindowo before proceeding to the House of former Vice President Atiku Abubakar, Federal Medical Center Yola and the scene of the explosion.

In his remarks, the Inspector General of police called on Nigerians especially the people of Adamawa state to have confidence and trust in Nigerian police and other security outfits adding that they are doing their best to nip in the bud the current security challenges bedeviling the country.