All set as Jonathan hands over to Buhari today 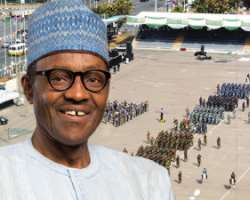 Contrary to speculations, indications emerged on Thursday that the outgoing President, Goodluck Jonathan, will attend the historic occasion which would mark the first time a sitting president would hand over power to a victorious challenger.

The event expected to be witnessed by many world leaders will take place at the Eagle Square, Abuja, the nation's hilly capital city.

As of the last count, no fewer than 20 world leaders have flown into the country in readiness to attend the ceremony.

Activities at the Nnamdi Azikiwe International Airport, Abuja, peaked on Thursday as Presidents and representatives from many countries landed at the facility and were subsequently driven to their various hotels.

It was learnt that Jonathan, whose administration had earlier expressed the wish to hand over power to Buhari a day before the May 29 official date, has decided to attend the event in demonstration of his sportsmanship.

It was gathered that the outgoing President would fly the flagship of the presidential fleet codenamed 'Nigerian Air Force 001' or 'Eagle One' in an official capacity as President for the last time today.

After the inauguration, the aircraft will fly Jonathan to the Port Harcourt Airport, Rivers State, from where he is expected to be flown in a helicopter to Yenagoa, Bayelsa State, en route a homeward journey in a convoy of cars to Otuoke, his hometown.

Speculations were rife that Jonathan might shun the inauguration ceremony owing to the acrimony that greeted the election.

But a top Presidency official, who pleaded anonymity, told our correspondent that Jonathan would attend the event.

He said if Jonathan failed to attend the event, he might end up portraying himself as a bad loser despite the fact that he conceded defeat to Buhari shortly after the election.

The official, however, expressed the hope that the leaders of the All Progressives Congress would prevail on their supporters not to do anything to humiliate the outgoing President at the event.

The official said, 'Immediately after the inauguration, the outgoing President will travel to his state on Air Force 001 for the last time.

'As a former President, any of the smaller aircraft in the presidential fleet can be made available to him on request, but not the 001. The only reason why he can fly that aircraft again is either if he becomes the President again or if he is to accompany a sitting President on a trip.'

It was learnt that before 5pm on Thursday, the aircraft of over 10 African countries had touched down at the tarmac of the Nnamdi Azikiwe International Airport, Abuja.

Our correspondent gathered that the two recently inaugurated lounges for pilots and international protocol officers located close to the international wing of the airport, were beehives of activities as some guests were received at the new facilities.

Officials at the NAIA stated that the Presidents of the different nations were sighted at the presidential wing of the airport while countries, whose Heads of State could not show up, sent representatives.

The flags of the visiting countries were displayed on the airplanes.

'Some of the countries whose Presidents or representatives are now in Nigeria include Mali, Sudan, South Africa, Namibia, Chad, Morocco, Burkina Faso, Senegal, the Gambia and Guinea,' an official of NAIA said.

The President of South Africa, Jacob Zuma, was sighted at the airport, according to our source, who added that the advance teams of France and the United States were on the ground as of the time of filing this report.

The official stated that the flight of the US government was scheduled to land around 3am on Friday.

Our source said, 'Other countries whose Presidents or representatives also arrived Abuja airport on Thursday included Togo, Angola, Lesotho, France, Ghana, Turkey, United Arab Emirates, Brazil and Saudi Arabia. More are still coming, going by the manifest that we have.'

The United States President Barrack Obama has detailed the US Secretary of State, John Kerry, including basketball icon and Olympic Gold medallist, Hakeem Olajuwon, to the inauguration. Other members of the delegation are the U.S. Ambassador to Nigeria, James Entwistle, and the Assistant Secretary of State for African Affairs, Department of State, Linda Thomas-Greenfield.