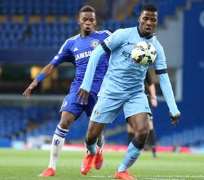 Nigeria starlet Kelechi Iheanacho has turned down a chance to go on loan from top EPL side Manchester City, preferring instead to battle the likes of Sergio Aguero and Edin Dzeko for a first-team place at City.

An inside source at City said Iheanacho, who has been granted his work permit in the United Kingdom, was given the option to go on loan so as to play regular first-team football and then return to the club a lot more experienced.

But he turned down this chance, insisting he would rather stay back at the club and fight to make the first team.

'He refused to go on loan. He and his representatives have told City he would rather battle the likes of Aguero and Dzeko for a place in the first team,' revealed the source.

'His compatriot, Chidiebere Nwakali, opted for a loan move away to Malaga because his management team believes he has to gain experience outside the club before he could really challenge for a place in the City main team.'

The 18-year-old Iheanacho, who is bound for this month's FIFA U20 World Cup with Nigeria, was a big hit during City's pre-season tour of the USA in the summer.

He has fully recovered from injuries to score goals for Manchester City U19 and U21 teams recently. Agency news