They turned me into a sex machine': Woman made pregnant by Boko Haram rapists reveals her horror 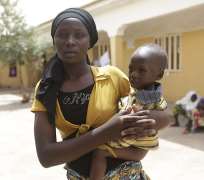 A woman has told how Boko Haram turned her into a ‘sex machine’ as it is revealed 214 among a group of 500 women and girls rescued from the militants have returned pregnant. Asabe Aliyu is a 23-year-old mother of four children from Delsak, a village near Chibok town in northeastern Nigeria.

She was abducted from her village six months ago when it was overrun by Boko Haram and taken to the extremist’s stronghold in the Sambisa Forest.

After a series of sexual assaults on her by different men committed day after day, she was forced into marrying one of the fighters. ‘They turned me into a sex machine. They took turns to sleep with me. Now, I am pregnant and I cannot identify the father.

‘With my condition as a pregnant woman, I did the cooking of their food.’

Among a group of 534 girls rescued from Boko Haram 214 are pregnant and many are living with the horror of carrying their rapists’ babies.

Like Asabe, many were treated as ‘sex slaves’ by the militants and arrived starving and traumatised at makeshift army and government camps after trekking through the bush for up to two days.

They had been held in the Sambisa Forest before government forces moved in and the extremists fled, leaving hundreds of women to fend for themselves.

Around 700 have been freed from the clutches of the terror group in recent weeks.

They had been held in horrendous conditions after being abducted by Nigeria’s homegrown Islamic extremists.

The United Nations Population Fund (UNFPA) has been providing counselling and support to 534 of these women in Borno and Adamawa states and found 214 of them to be visibly pregnant.

‘At least 214 have been made pregnant and there are stories of rape.’

It is not yet clear how many of these are carrying babies by militants.

Dr Osotimehin said: ‘I am a Nigerian as well and I will tell you this much – for a woman to claim that she has been raped, in my country, is one of the most difficult things.

‘When they actually do so I want to believe them. We are looking after them to give them all the support they need so that they can go through and have a normal delivery.

‘What’s going to happen then is for them to decide. I think they are so upset, the girls. They require social and psychiatric support because it’s affected them very deeply.

‘I don’t know what Boko Haram want to get out of it. What I think is going on is that they are using women and women’s bodies as weapons of war and weapons of oppression and that business model is not only with Boko Haram, it’s also with ISIS.

‘They see it as a means of advancing their cause and getting the attention of the world.’

The Malkohi camp outside the city of Yola is now home to 293 women and children who were brought in last weekend after being rescued on April 28.

Not only have they endured being uprooted from their homes at the point of a gun but they have lost husbands, children and other family members, sometimes killed in front of them.

Militants stoned about 10 women to death for refusing to flee with them, several were accidentally crushed by an armored personnel carrier and three died when they triggered a land mine.

It is unclear if those rescued include the so-called ‘Chibok girls’ captured from a boarding school in Chibok town more than a year ago. Dozens escaped but 219 remain missing.

Lami Musa, 27, cradled her five-day-old baby girl as the militants carried out the brutal stoning

She was in the first group of 293 rescued women and girls to be transported by road over three days to the safety of the Malkohi refugee camp on the outskirts of Yola, the capital of Adamawa state.

Musa a gave birth to a curly-haired daughter the night before being rescued.

She told Associated Press: ‘Boko Haram came and told us they were moving out and that we should run away with them. But we said no.

‘Then they started stoning us. I held my baby to my stomach and doubled over to protect her.

‘They took me so I can marry one of their commanders,’ she said of the militants who carried her away from her village after slaughtering her husband and forcing her to abandon their three young children, whose fates remain unknown. That was five months ago in Lassa village.

‘When they realized I was pregnant, they said I was impregnated by an infidel, and we have killed him. Once you deliver, within a week we will marry you to our commander,’ she said.

Another survivor, Binta Ibrahim, was 16 years old and accompanying her sister-in-law to the dressmaker when Boko Haram insurgents rode into their village of Izghe, firing randomly at civilians.

On that day in February 2014, at least 109 people were killed and almost every hut destroyed as the militants lobbed firebombs onto their thatch roofs.

Ibrahim, her sister-in-law and two of Ibrahim’s sisters were among scores of young women abducted.

Her two sisters escaped in the pandemonium that surrounded an air raid, but Ibrahim, who was caring for three children she found abandoned after the insurgents moved into the neighboring village of Nbitha, did not go with them.

‘I had these three kids to care for and I couldn’t abandon them a second time,’ she explained.

She described trekking for two days from Nbitha to Boko Haram’s hideout in the Sambisa Forest with 2-year-old Matthew and 4-year-old Elija Yohanna strapped to her back and 4-year-old Maryam Samaila clinging to her waist.

‘They were so weak from lack of food that they couldn’t walk. There was nothing to do but rest when I couldn’t take another step, and then press ahead when I had recovered,’ she said.

Many militants were killed in ‘a fierce encounter’ that cost the life of one soldier and wounded five, Col. Sani Usman said in a statement.

A three-month-old multinational offensive has driven Boko Haram from towns where it had declared an Islamic caliphate.

The militants have retreated into the vast Sambisa Forest, where they have planted land mines to impede attacks.

‘Our troops are unrelenting in their determined efforts of vanquishing Boko Haram terrorists wherever they are,’ Usman said.