A Tribute To My Father (ichie L.m Onwumere; Nze Egedinogwu) 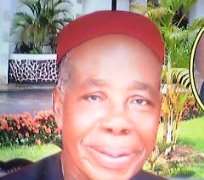 Papa, I am now living with grief. I have realised that grief has no gender. You knew me as your brave and fearless son. But I must confess that your unexpected passing away on March 28 2015, has not only humbled me, but has also kept me in a box of rumination.

I had expected that you would grow into a very old man, as you never showed any sign that the end was about to come. For the years I knew you, you never felt sick. This is my point!

Your humility that was embedded in ultra wisdom, which I had thought that with time I would make sure that I optimally tap into them, have eluded me. At least, I had expected that I would be inviting you as long as I can’t count to visit me. You were doing so, but not much as I had wanted it to be, expecting when your older age would come.

Your passing away, just like a thunderstorm, is one grief that sucks. And trying to avoid the grief, is robbing me of my life. I have taken much alcohol that I stopped a long time ago, but found out that it was not helping. I am befriending grief and it has seemed that I’m in a pilgrimage of grief since the sad event occurred.

Although, it was not your idea to invite this grief to becloud me, as I could remember you holding my hand on that hospital bed and telling me that nothing will happen to you. I promised to come back on Thursday, but here I am in shock of your demise. This is a pilgrimage of loss!

I had an interpersonal bond with you, no matter the challenges that we had as father and son. I’m yet to accept that grief is a healthy human feature to heal his or her loss. Yours is immeasurable. I can only accept it, because sages of different ages had characterized grief as normal, indisputable, vigorous and a widespread way of responding to the loss of a beloved one.

But if there is a scale to measure the weight of the one lost, no store in the universe can have such scale to measure your germane qualities and contributions to my existence. And if there should be such scale, it can only show the eloquent account of my devastation, as your contributions to my living cannot be contained in any book of the world. You were a father to many and friend to all, regardless!

This wound that death has inflicted on me will never heal, even though that with time it might not be raw, as it is now. I am longing for you now. I am finding it hard to assess the energy and strength to bear the beginning of this new era in my life.

Papa, even though that you were a Christian (Catholic), I have the belief that you have passed through the natural process of birth, death and rebirth, known as reincarnation. You have dropped the physical body from this world(less) cave to evolve in the world beyond mortals. But if death is a destiny, you did not create your own. I would not say that death is Karma, because you lived an upright man, who was so accommodating, even to your detriment.

As the first child and son of Dibia Ihebuzoaju Paul Onwumere, you showed love beyond your mother’s kitchen. If you could die, you have made me not to fear death again, as I was once doing. You have made me to upgrade my belief in the fact that death is a spiritual prospect. And you embraced death perhaps knowing that it is a natural cycle of life, just as a friend had to tell me on seeing my grief that “death is a rebirth.”

You have sojourned to be perfect in oneness with your Chi(Your God). To the mortal, you are dead, but you are in the uppermost state of consciousness. If I must say, you did as you could in making sure that all the businesses of this world that makes a man, you did them all.

Papa, ga nke oma! You would be remembered in this life time by all and sundry that knew you and shall be consumed by history by generations to come in our lineage and beyond. Hence, I will keep you like lamp that keeps burning, even though that you have burnt part of your incense.