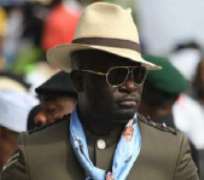 Emami, now a chieftain of the All Progressives Congress (APC) in Delta State and a former Itsekiri warlord, said on Thursday that Buhari should also probe the operations of the Amnesty Programme.

“If the layman’s understanding of the word amnesty is anything to go by, then it presupposes an arrangement where militants who genuinely turn in all their arms and ammunition are rehabilitated, re-oriented and trained with a view to reintegrating them to everyday societal living.

“In the ordinary sense of it, any person or group that picks up arms in the name of struggle or agitation ought to have been treated as terrorists, hence nobody or group should take the gesture of the federal government for granted.

“Amnesty should not be continuous; partially giving out money to youths from a particular ethnic nationality is wrong, sending some of them abroad for training without any visible impact on the Niger Delta and the nation at large is counter-productive,” he said.

His declaration was obviously in reaction to a recent call by the Ijaw Youth Council, demanding the continuation of the Amnesty Programme for Niger Delta youths.