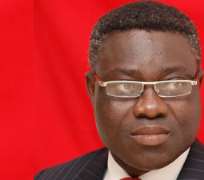 The shareholders of United Bank for Africa Plc have approved the 10 kobo dividend per share proposed by the bank for the 2014 financial year and praised its board and management for its expansion to other African countries.

The shareholders, who commended the bank's board and management at its 53rd Annual General Meeting in Lagos, also approved its annual reports and accounts for 2014 and all resolutions presented at the event.

Shareholders, while praising the bank for its increasing penetration to other African countries, expressed satisfaction at its emergence as the best bank in Cameroun and Senegal for the fourth and third consecutive year, respectively.

Noting that the dividend approved would allow the bank to retain much of its earnings to expand its operations, the shareholders expressed the hope that the bank would deliver higher returns to them over the medium to long term.

It was the bank's first AGM since the appointment of Mr. Tony Elumelu as its chairman and the shareholders welcomed the development.

The National Coordinator, Independent Shareholders Association of Nigeria, Sunny Nwosu, said, 'Holistically, UBA has done well. The only area we feel you've not done too well is in the area of dividend. We also congratulate the board for the successful rights issue.'

Another shareholder, Mr. Mukhtar Mukhtar, said, 'He (Elumelu) has proven to be a business leader. I am also happy with the bank's performance; I have no doubt that it will continue to improve with Elumelu as chairman. We know he will preserve and enhance corporate governance.'

Elumelu, who thanked the shareholders for the support, assured them that the board and management would ensure that it sustained its leadership position in the banking sector, stressing that it would uphold best practice in corporate governance. He explained that the dividend payment for the year was guided by the need for the bank to be prudent.

He said, 'Though UBA is adequately capitalised with capital adequacy ratios in excess of regulatory requirement, we proactively raised additional capital during the year to further boost our capital base and it would not have been prudent to pay so much dividend after raising capital from the market. Shareholders should, however, expect higher dividend in future.'

On the performance of the bank in 2014, he said, 'We recorded gross earnings of N290bn in the year, an appreciable growth of 10 per cent over our performance in 2013. This improved performance was buoyed by the increased volume of transaction across all our service channels and growing share of our customers' wallet.

'Notwithstanding the relatively high cost of doing business in Africa in the year, we remained prudent in our operations, thus ensuring our profitability in the year. Given increased extraction gains from our unique Pan-African platform, we are optimistic on delivering a stronger performance in 2015.'

The Group Managing Director and Chief Executive Officer, UBA, Mr. Phillips Oduoza, confirmed that the bank's expansion to other African countries had been successful with subsidiaries contributing to the group's profit.

He said, 'In 2014, the African subsidiaries contributed one-fifth of our earnings, a unique diversification benefit which UBA offers its shareholders. We will profitably and prudently grow our market share in all the 19 African countries (including Nigeria), where we operate, as we look forward to delivering superior returns to our shareholders.'